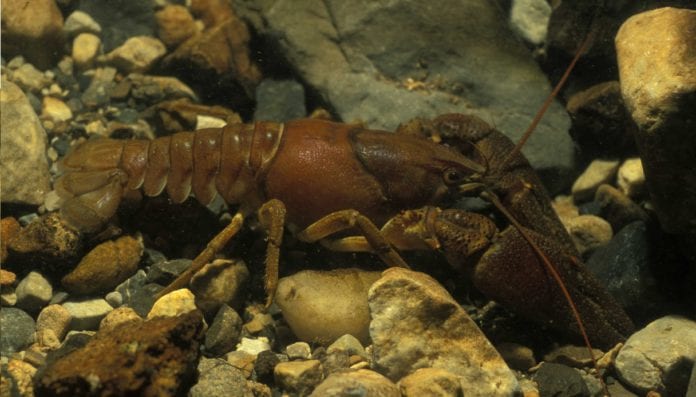 The National Parks and Wildlife Service and Galway’s Marine Institute are warning that invasive species and disease are threatening the survival of Ireland’s native Crayfish.

Ireland holds one of the largest populations of the globally-endangered White-clawed Crayfish.

This endangered population is under threat from the twin impacts of Crayfish plague and the spread of non-native species.

The warning was issued ahead of a seminar on the White-Clawed Crayfish taking place at the Marine Institute in Oranmore today.

It comes after the NPWS confirmed the presence of Crayfish Plague on the River Maigue, upstream of Adare in Linerick earlier this year.

This is the seventh river known to have been affected by the plague, and it’s expected that it will wipe out all the stock in the river system.

The NPWS has also confirmed that a population of non-native species, the Australian Crayfish, has been found in the wild for the first time.

The agency said that the location of this discovery is not being disclosed at this time.

Brian Nelson, Invertebrate Ecologist with the NPWS said, “the discovery of the non-native crayfish species in the wild is of concern as this has never been found before in Ireland.”

“Although the species is one we would not have predicted, it presents us with a greater challenge of eradicating the species.”

“We would like to emphasise the growing threat that alien invasive species are having on biodiversity in Ireland and globally and we urge everyone to think carefully and help in its prevention.”

Invasive species have been identified as one of the five major threats causing a loss of biodiversity on a global scale.

On top of being an ecological disaster, this can also have a significant negative economic impact on Ireland.

The Marine Institute is urging people who work or spend time on the water to follow proper Check-Clean-Dry practices with their gear to avoid inadvertently spreading species from one body of water to another.

“For the most invasive species, there is now specific legislation in place which bans possession and keeping and gives the NPWS powers to seize specimens and eradicate them from the wild,” Brian Nelson said.