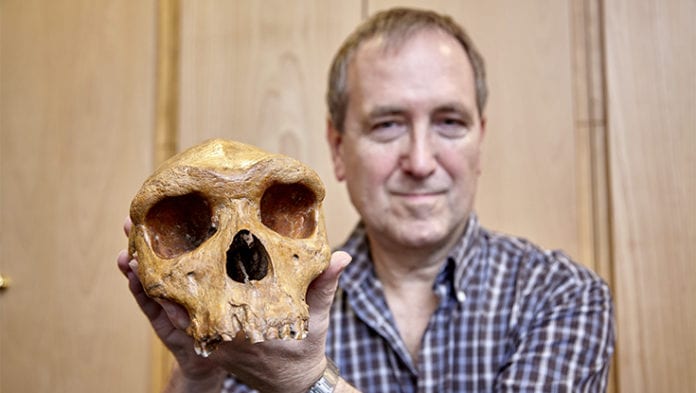 The medal, and guest lecture each recipient delivers, was created in 2015 to honour the legacy of William King, who made scientific history in 1863 when he first gave neanderthals a scientific name, home neanderthalensis.

Professor King was the first ever Professor of Geology and Mineralogy at Queen’s College Galway, as NUI Galway was known at the time.

“It was a remarkable achievement, and also an extremely important step in the early development of palaeoanthropology (the study of human evolution) in the Nineteenth Century.”

The most recent Medal was awarded to Prof Stringer for his contributions to our understanding of human evolution.

Professor Stringer is Research Leader in Human Origins at London’s Natural History Museum, and is best known for his work on the Recent African Origin theory of modern human origins.

In order to work on such a globe spanning topic Prof Stringer regularly collaborates with a large and diverse international network of archaeologists, dating specialists, and geneticists in order to reconstruct a model of human evolution.

Planet Earth is effectively his field study area, and his research has addressed one of the most fundamentally important questions that can be asked in science – what does it mean to be human?

As well as receiving the William King Medal, Prof Stringer also delivered a lecture titled ‘The evolution and fate of the Neanderthals’.

“The last ten years have seen many exciting developments in the study of Neanderthals – from how they evolved through to when they disappeared,” he commented.

“Including the remarkable discovery that most of us alive today have about 2% of their DNA in our genomes.”