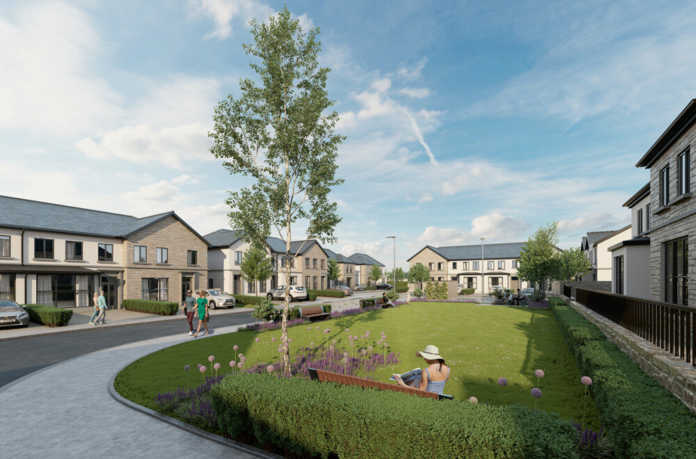 Plans for a large scale housing development outside of Barna are back before An Bord Pleanála, with planning permission sought for 121 homes.

Burkeway Homes Limited has made a Strategic Housing Development Application to the board for 121 houses, apartments, and duplex units across the townlands of Truskey East, Truskey West, Freeport and Ahaglugger in Barna.

“The proposed development will assist Galway County Council in meeting its commitment to provide for residential development and for associated support development,” a cover letter for the application states.

“which will ensure the protection of existing residential amenity and will contribute to sustainable residential neighbourhoods.”

In order to comply with Part V planning requirement, the developer proposes to transfer 12 units to the county council for use as affordable or social housing.

The development would also include a creche with outdoor play areas, footpath connectivity along the L-1321 road, communal open spaces, and a park along Truskey Stream.

The site for this proposed development would be accessed via the existing residential estate of Cnoc Fraoigh, which connects it to the Moycullen road.

“The site is currently formed of scrub land and rough agricultural grazing and the lands are generally bounded to the north and south by existing stone wall.”

Burkeway had previously been granted permission by An Bord Pleanaála for a 197 unit estate on an acre site at Truskey East in November 2018.

But that approval was struck down by the High Court after a judicial review was secured by Gabriel McGoldrick and Heather Hill Management Co, management company of an existing residential development nearby.

The court, in that case, said that the plans contravened the County Development Plan as the scale of it would ” breach the population allocation for Bearna”, and noted that the site was identified as a flood risk.

This application also contravenes the Plan, the application states, but a Material Contravention Statement has been submitted with this application, which states that the proposal for 121 homes “does not of itself exceed the population allocation of
420 or the housing units yield of 130 in the Core Strategy Table.”

An Environmental Impact Assessment Report, Flood Risk Assessment, and Natura Impact Statement have been prepared for this planning application.

An Bord Pleanála is currently due to make a decision on this planning application by February 15.

A website containing documentation for the proposed development has been set up by Burkeway at burkewaybearnashd.com.