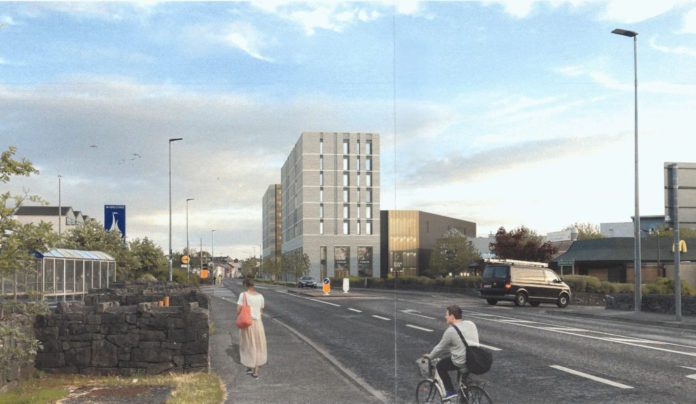 Galway City Council has granted planning permission for the construction of a 254 bed student accommodation development on the Headford Road.

Cleverson Ltd submitted plans for an 7/8 storey development consisting of retail units at the ground floor, a gym on the second level, and another six floors of student accommodation.

The student accommodation would take the form of 74 apartments in a mix of units with between one and seven beds per apartment.

Planning permission was granted by Galway City Council with a total of 28 conditions attached.

Before any work begins Cleverson must pay the city council a contribution of €388,272 towards the provision of public services.

During the academic year the residential aspect of the building may only be used for student accommodation, or other accommodation associated with an higher education institute.

During academic holidays, it may also be used for tourist accommodation, condition no. 2 states.

The site of the proposed development is next to the Galway Retail Park, between the IMC Cinema, the Headford Road, and the Dyke Road car park.

Most of the site is undeveloped “brownfield” lands according to the application, while the southern end of it is currently a car park, also owned by the developer.

One objection to this project was received from Galway Retail Park Management Company, which raised concerns about excessive scale and plot ratio, and insufficient parking.

The objection also stated that the plans made no reference to existing infrastructure on the site, and that their consent must be acquired if the developer seeks to connect to existing services within Galway Retail Park.

The development has been designed as two building blocks connected via a glazed link bridge. The block closest to the retail park will be eight storeys in height, while the southerly block will be seven storeys.