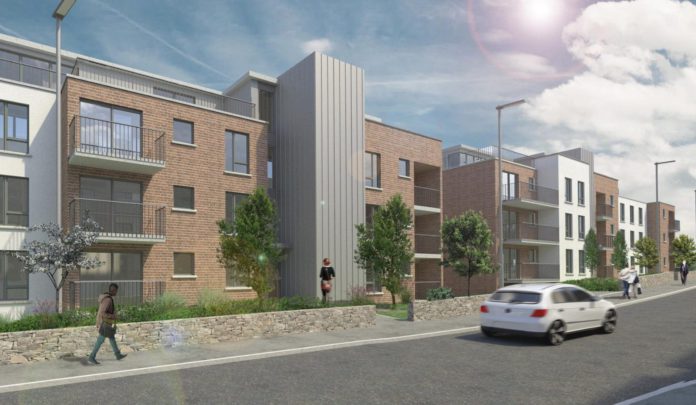 An Bord Pleanála has given the green light for a large scale housing development in Ballybrit, consisting of 102 new homes and a creche.

Sathel Limited has received planning permission for a strategic housing development on a 1.46ha site is located between the Monivea Road and Ballybane More Road, in between the existing An Luasan and Dun Briosta estates.

Three bungalows and a derelict semi-detached house which are currently on the site will be demolished before construction work takes place.

The development will consist of 13 semi-detached houses, in a mix of two, three, and four bed units; 34 duplex units ranging from one to three bed homes; and 55 apartments in two separate blocks.

Each of the proposed apartment blocks will be a five storey building on the Ballybane More road end of the site.

In order to fulfil their Part V planning requirements, Sathel proposed that 10% of the units will be transferred to the city council for affordable or social housing.

Access to the site for vehicles will be via a new entrance onto the Monivea road, with a pedestrian and cycling entrance on the Ballybane More Road.

A Material Contravention of the City Development Plan was granted for this development, allowing parking provision well below the 238 parking spaces which would be required under the council regulations, as well as in relation to the site density.

Only two third party submissions were received by An Bord Pleanála from local residents, one of which did not object to the proposal, but seeking clarity on privacy at the boundary with their property.

Another individual said that the plans did not have enough parking spaces for the number of residents, or the creche, and that it lacks sufficient open space.

The plans include for 2,130m² of public open space, just over 15% of the area being developed, most of which is green areas in the centre of the site, which includes a children’s playground.

Planning permission was granted by An Bord Pleanála with a total of thirty-two conditions attached.

The only material changes to the plans required by the Bord was the removal of a single south facing window from one of the units.

Proposed works on the public road, and details of the cycle ramp providing access from the Ballybane More road must be agreed on with the planning authority beforehand.

A minimum of 10% of the car parking spaces for the development must also have electric vehicle charging points.

Before any work begins on any houses or duplex units, the developer must have an agreement with the planning authority on where each of those will be located.

The is agreement will also restrict those units’ “first occupation” to individual purchasers, not corporate entities, and people “eligible for the occupation of social and or affordable housing, including cost rental housing.”

An Bord Pleanála also insisted that the creche and communal open spaces must be delivered in the first phase of the project, rather than the final phase, as Sathel has intended.