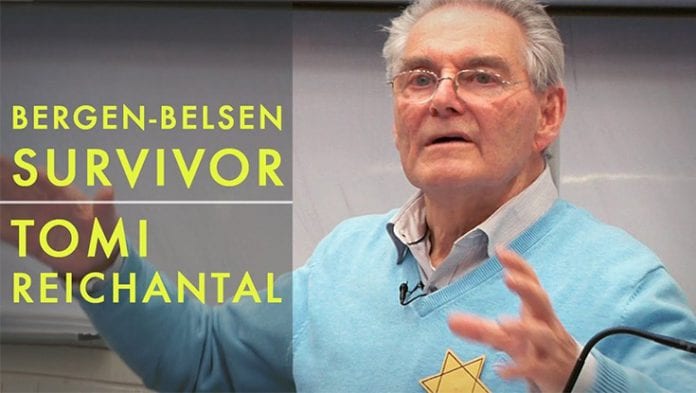 Tomi Reichental, a survivor of the Bergen Belsen concentration camp, will speak about the horrors he endured and the need for solidarity at a Holocaust memorial event in Galway next week.

NUIG’s Irish Centre for Human Rights and An Cumann Staire/History Society are hosting a Holocaust memorial talk next Wednesday, January 29.

Tomi Reichental was born in 1935 in Piestany Slovakia. In 1944 at age nine, he was captured by the Gestapo in Bratislava and deported to Bergen Belsen concentration camp with his mother, grandmother, brother, aunt and cousin.

When he was liberated in April 1945, he discovered that 35 members of his extended family had been murdered.

His grandparents, uncles, aunts and cousins all died in the Holocaust. One of just a small number of Holocaust survivors living in Ireland, Tomi has delivered talks in schools, colleges and other events around the country.

For years he has worked to educated people about the horrors that we endured to promote tolerance and reconciliation.

Recounting the sights and smells at the concentration camp Tomi said: “Typhoid and diphtheria were the biggest killers, but people were dying of starvation and cold in their hundreds.

“First the bodies were removed and burned, but later they were just piling up in front of our barracks, there were piles of decomposing bodies.

“The soldiers who liberated Belsen in April 1945 said they could smell the stench for two miles before they reached the camp,” Tomi added.

“In the camp I could not play like a normal child, we didn’t laugh and we didn’t cry. If you stepped out of line, you could be beaten up even beaten to death. I saw it all with my own eyes.”

“He reminds us of our common humanity and the need for human solidarity,” Professor Murphy added.

Joining Tomi will be Ben Barkow, recently retired director of London’s Wiener Library – the world’s oldest institution created for the documentation of the Holocaust.

He is chair of the Academic Advisory Board of the UK Holocaust Memorial Foundation, which is creating Britain’s national Holocaust memorial next to the houses of Parliament.

He is also on the advisory board of the Imperial War Museum’s planned new permanent Holocaust exhibition and is a trustee of a number of a number of Holocaust-related charities.

The Holocaust memorial event and talk will take place in NUIG’s Human Biology Building at 6pm next Wednesday, followed by a Q&A session.

Admission is free but early arrival is advised.

Briain Kelly - May 26, 2022 0
After years of monthly zoom meetings, Over the Edge is welcoming lovers of the written word back to Galway City Library. The May Over the...