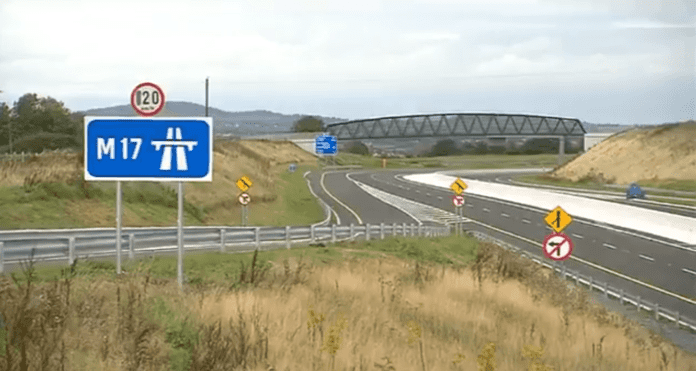 The Gort to Tuam motorway is now officially open to traffic, after being oficially unveiled by Transport Minister Shane Ross today.

The 57km toll-free route opened well ahead of schedule and will slash travel times across the west.

Laid out on a largely greenfield route, the 57km stretch of motorway should shave at least 20 minutes from journey times from one end to another (depending on traffic conditions), and will allow traffic to bypass Tuam, Claregalway, Clarinbridge, Kilcolgan, Ardrahan and Gort.

A spokesman for Transport Infrastructure Ireland said: “The new road will significantly improve safety and reduce journey times for traffic travelling north-south along the West of Ireland.

It will also improve connectivity between the Western Region and Dublin and will significantly assist in the economic development of the BMW (Borders, Midlands and Western) regions.”

The motorway intersects with the existing M6 motorway at Rathmorrissey.

It opened to traffic on a rolling basis throughout the afternoon, and is now fully open.

The project has been causing some delays in recent months, and it is expected to have cost in the region of half a billion eruo.

Picture just minutes before it opens.Tuam-Gort along West of Ireland. In distance is our farm & hopefully site of new Apple Data centre 😉 pic.twitter.com/HV5yCgAmQJ

With the new motorway, the stretch of the N17 which the Saw Doctors’ sang about is now defunct. But the Tuam band have ennsured that the road will live on forever, if even just in song and memory.

New motorway means the N17 from Tuam is history. Reaction from @sawdoctors and more on the new M17 on @morningireland from 7am on @RTERadio1 pic.twitter.com/NLrlBNbIEC