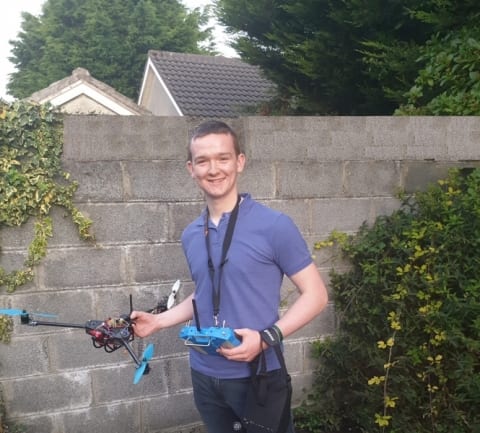 Work smarter, not harder, is a maxim that’s endured for years, and one GMIT student will show how to do just that with a livestock monitoring drone at the National Ploughing Championship.

James Serridge, who has just completed his honours degree in Mechanical Engineering at GMIT, has been shortlisted for the Innovation Arena Awards competition at the Ploughing Championship for his final year project, a prototype drone with integrated active RFID reader.

James is originally from Castlerea, Co. Roscommon, but currently lives in Galway where he has been studying.

“I always had an interest in machinery, electronics and engineering from a young age which led me to pursue Mechanical Engineering as a career,” James said.

He said that the goal of his final year project was “based on making life safer and easier for farmers”.

On top of it being a danger to the farmer, it can also be extremely time consuming for some farmers to cover their holding when the average size of a farm is 80 acres.

James Serridge said “To help reduce the number of such incidents, I envisioned, designed and manufactured a prototype drone which is capable of monitoring livestock at a safe distance using First Person View camera and Active RDIF technologies.”

Currently the First Person View camera can transmit live feed from the drone to a tv/monitor, or a set of goggles.

However James said that with further work it could be pre-programmed to follow a specific flight path around a farmer’s holdings.

The RFID reader integrated into the drone can capture and transmit livestock’s tag data from a distance of 30 to 340 metres.

The drone’s onboard GPS can then tag the animal’s location with its tag data.

James added that although drone use has become ubiquitous there are currently none on the market that come with Active RFID technologies.