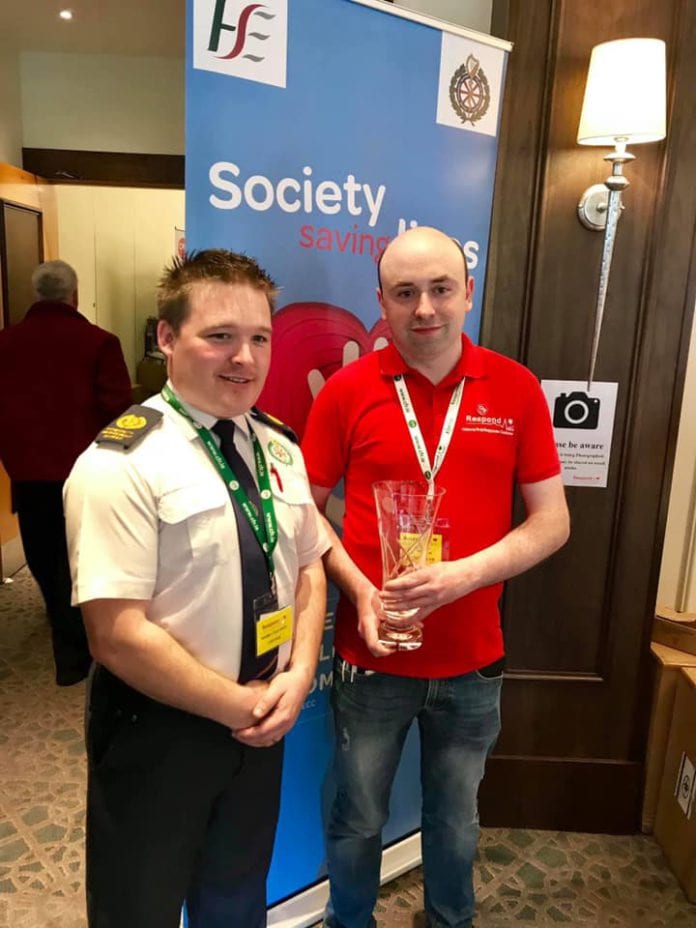 Galway man Gearóid Ó Cinnéide was honoured with the Geoff King Award for the lifesaving work he has done at the national Community First Responders Conference over the weekend.

Gearóid is the coordinator of the Athenry community first responders and is a member of the Craughwell, LCDPM, and Gort groups.

The goal, Gearóid said, is to strengthen the “chain of survival” by getting someone properly trained to the patient as soon as possible, to begin treatment before the ambulance arrives until the paramedics can take over.

Another big thing he would encourage people to know is their Eircode, as it makes it far easier for first responders and ambulances to find homes.

He added that he was not expecting to be chosen of more than 550 people in the room all who give up their time and energy to help others.

“We as Community First Responders make personal sacrifices and volunteer our time to attend training, respond to emergency calls and educate our local community with regard to CPR, defibrillation and the identification and management of stroke and heart attacks prior to the arrival of the ambulance,” Gearóid said.

The Geoff King award was launched at Respond 2015 in memory of Dr Geoff King, and is given to any group or individual who has “gone the extra mile, gone outside of their comfort zones, put in a special effort or innovated to ‘strengthen the chain of survival'”.

Gearóid was awarded the Geoff King Prize at the 2019 Respond Conference organised by Community First Responders Ireland, an unbrella organisation for CFR groups.

There are currently 19 active CFR groups in Galway Gearóid said, and another five are in training and about to go live.

CFRs work closely with the National Ambulance Service, and are automatically notified when a 999 comes in for one of those four key area.

Gearóid there is incredible cooperation between paramedics and first responders, with the former happy to provide feedback to make their training even better in the future.

Many CFRs go on to join the National Ambulance Service, he added.

Recently, they have been putting effort into coordinating all of these groups with the Galway Community First Responder Group Network.

Through this network, people in Galway who are interested in working as a first responder can be pointed to any nearby groups they can join, or get assistance to help set up a group in their own community.