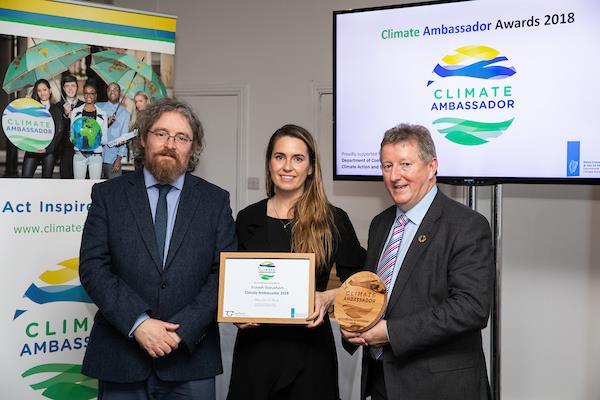 Galway woman Niamh Banahan was one of eleven people honoured at the inaugural An Taisce Climate Ambassador awards this week.

The Climate Ambassador programme identifies champions in our schools, colleges, and communities who can work as ambassadors to take action that will spread awareness of climate change.

The pilot programme selected 108 ambassadors from 22 counties who were each trained and asked to carry out four key actions this year to improve the local environment and communicating climate change.

Some of the actions taken over the past 12 months were hosting climate talks, participating in community festivals, planting native trees, and carrying out climate workshops.

Niamh took to Instagram to say it was an honour to receive this acknowledgment adding, “To even be in the room with the other incredible Climate Ambassadors is an honour.”

“This gives me such confidence to move forward with environmental initiatives in the workplace,” she said “and to do absolutely everything I can as a citizen to tackle climate change.”

Minister of State and Galway East TD Seán Canney attended the awards and praised the work done by each of the ambassadors over the past year.

“These Climate Ambassadors represent the best of civic engagement in Irish society with a diverse range of individuals committed to taking action, as well as mobilising their wider communities, to address the challenge of climate change.”

The Climate Ambassador programme is one part of the National Climate Change Action and Awareness Programme run by An Taisce.

Deputy Canney emphasised how crucial it is to show individuals, businesses, and communities how they can tackle climate change and help improve the environment.

“Engagement on the ground is crucial if we’re going to work together to tackle climate change,” he said.

“Hearing about the great work carried out by Ireland’s first Climate Ambassadors I see this programme as another step towards making Ireland a leader in Climate Change.”