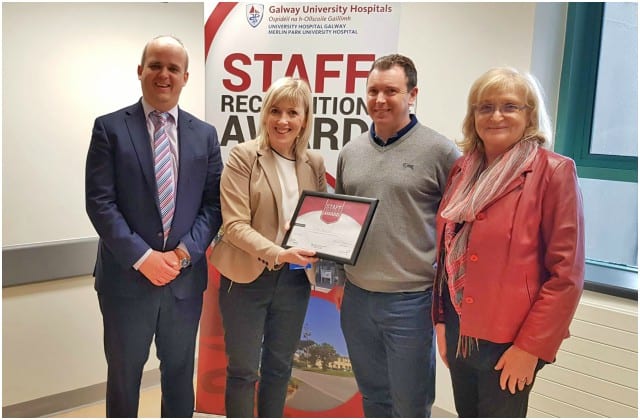 Galway University Hospitals handed out their first Staff Recognition Award to an employee at UHG this week.

Shaun Plower from Loughrea is a Clinical Engineering Technician with the Medical Physics Department at University Hospital Galway.

He was nominated for this award for his role in the modernisation of the Ear Nose and Throat (ENT) Outpatient Department at UHG.

Thanks to state of the art technology for collecting data, examinations, and procedures, as well as adding four new procedure rooms, UHG now has one of the most modern and technologically advanced ENT Outpatient Departments in Europe.

This has vastly improved the patient experience in the department and made the staff’s work easier with its improved systems.

The Staff Recognition Award was created recently by GUH to honour those members of staff who go the extra mile to look after patients and support their colleagues by motivating, mentoring and inspiring others.

“The nomination for him referenced ‘his unlimited support and knowledge but most importantly his interest, enthusiasm and readiness to move forward.'”

“Shaun is a very worthy recipient of the first GUH quarterly Staff Recognition Award as an example of a colleague who performs at a level above and beyond normal job requirements and expectations,” Chris said.

“I am delighted that we now have a means to publicly recognise Shaun and the many other staff like him who may be nominated for future awards.”

Any member of staff at UHG or Merlin Park can nominate one of their colleagues who they think has shown exceptional service for this award.

From among those nominees, one person will be chosen for special recognition each quarter.