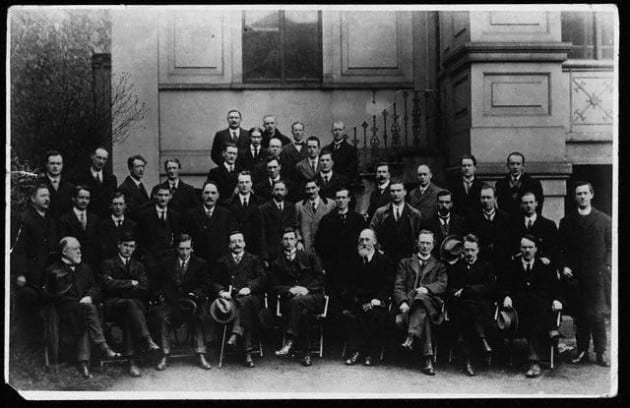 Celebrations commemorating the 100th anniversary of the first Dáil will take place on Monday with events across Galway city and county.

Ireland’s first Dáil met at the Mansion House in Dublin on January 21, 1919 and declared Ireland to bean independent nation.

The ratified the proclamation made at the 1916 Easter Rising and adopted a provision constitution.

That day also saw the Soloheadbeg ambush, often seen as the first engagement of the War of Independence.

A parade through the city celebrating that history occasion is being put on by An Taibhdhearc, Galway’s Irish language theatre.

The parade will go from Middle Street, starting at 2:50pm, to Eyre Square.

It will feature actors dressed as those first Teachtaí Dála and the Tulla Pipe Band from Clare.

At the end of the parade a re-enactment of the fist Dáil meeting will be held at the Tower in Eyre Square Shopping Centre.

Later that evening An Taibhdhearc is hosting a free event back at the its theatre at 5:30pm, where Professor Gearóid Ó Tuathaigh will address the audience.

The county council is hosting two lectures on the Dáil in the city and in Claregalway.

Dr Conor McNamara will speak about the democratic process that led to the Dáil in ‘Revolution at the Ballot Box: County Galway and the 1918 General Election’.

Following that Dr Síobhra Aiken will deliver her address ‘From Suffrage to Soloheadbeg: Reflections on the First Dáil’.

Those free lectures will be on in the city at the County Hall on Prospect Hill from 1pm – 3pm.

Later that day you can catch them at the Claregalway Hotel in Claregalway from 7:30pm – 9:30pm.

And finally the Galway Council of Trade Unions is hosting a special commemorative discussion at the Mechanics Institute on Middle Street at 8pm.

Political developments in Galway, the labour and women’s movements, and the republican vision of Sinn Féin.

This pane style discussion is meant to have plenty of audience participation.