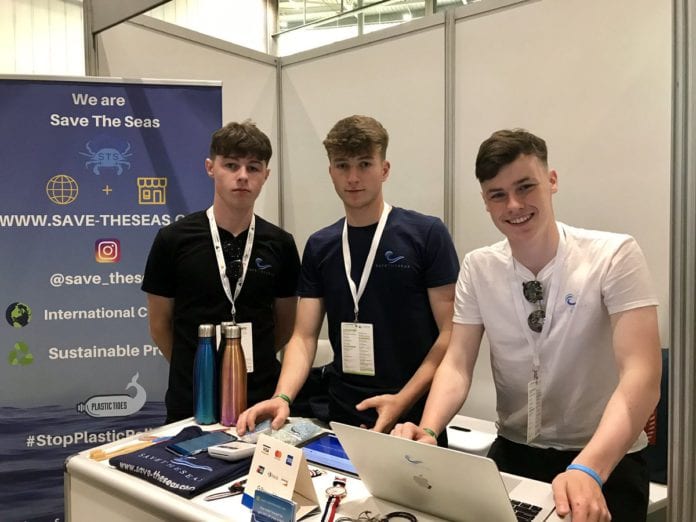 Three Galway students have proudly represented their country at the Junior Achievement (JA) Europe Company of the Year Competition 2019 in France.

Stephen Connolly, Feidhlim Folan and Eanna Curran from Coláiste Cholmcille, Indreabhán, travelled to Lille in France with their business ‘SavetheSeas’.

Savetheseas is an online retail business which raises money for charities working to remove plastics from the ocean.

As winners of the Údarás na Gaeltachta Clár na gComhlachtaí in March this year, ‘SavetheSeas’ had the honour of representing Ireland in the prestigious pan-European stage of the competition.

Since its launch in 1919, the JA Company Programme offers students aged 15-18 the opportunity to learn how to move a business idea from concept to reality.

Throughout the school year, students produced a product or developed a service, creating their own company and managing their business from start to finish.

The winner of the JA Company of the Year Competition was Turkey, with their company ‘Entellacompany’ Entella Company created Mareen, a cylindrical filter that aids in waste capture and removal in the ocean and other bodies of water.

Following the competition the ‘SavetheSeas’ said: “Representing Ireland at the JA Europe Company of the Year Competition was amazing and a huge learning curve.

We have gone from being 3 ordinary teenagers in Connemara with an interest in technology and ocean and marine welfare to representing our school at national and European level.

During this experience we have interacted with experts in entrepreneurship in local companies and universities to being judged by a jury of international business leaders.

We have developed a multitude of skills throughout this project and are very grateful to Udaras na Gaeltachta and
Junior Achievement Ireland for this opportunity, which has further inspired and motivated us to continue with our company ‘SavetheSeas’.

Earlier in the school year ‘SavetheSeas’ had competed against more than 750 Transition Year students in seven Gaeltacht regions in Cork, Galway, Donegal, Kerry, Mayo, Meath and Waterford during the Údarás na Gaeltachta Clár na gComhlachtaí which is run in partnership with Junior Achievement Ireland (JAI).

The students also received workshops on entrepreneurship from John Breslin and Jonathan Levie of the National
University of Galway.

JAI is a part of JA Europe, the largest non-profit in Europe dedicated to preparing young people for employment and entrepreneurship.

This is the first time that winners of the Údarás na Gaeltachta Clár na gComhlachtaí had the opportunity to take part at the European level of the competition.