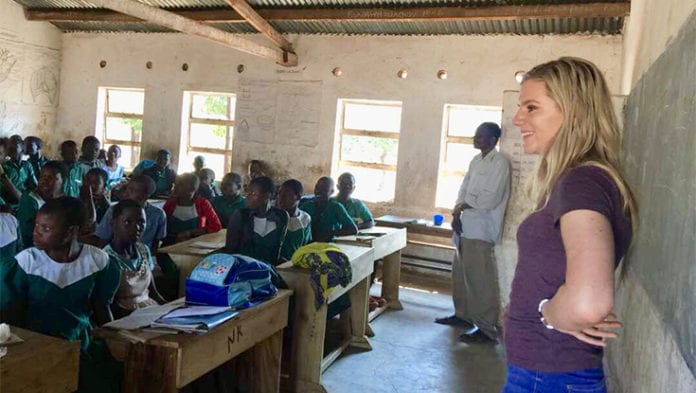 One student at NUI Galway is leading an incredible campaign to fund the construction of a secondary school in Malawi.

Nicole Loughlin from Headford was inspired to try and help the schoolchildren of Malawi during a summer visit there where she saw the poverty affecting so many.

Children struggling to survive on their own, or else living in orphanages that aren’t equipped to deal with the number of children without parents.

But despite the hardships that many of these incredible children live with, one of the first thing that hit Nicole was the positivity of their outlook on life.

Before going there her head was filled with perception about a developing country, “images of poor malnourished infants barely dressed, displaying ribs and swollen stomachs,” she said.

“I was pleasantly surprised and shocked however as I was presented with smiling faces of respectful and loving children.”

Many of those children will walk miles every day through whatever conditions the weather can throw at them to get an education, and a chance at a better life.

Faced with their resolution, this pre-school service teacher decided to do what she could to raise funds for a rural post-primary school in an area with less access to education.

A fourth year student of Mathematics and Education at NUIG, many of Nicole’s classmates and local schools have already agreed to help her fundraise for the project.

Beyond that she aims to encourage other regional schools to take part in the Global Citizenship Education Week running from Monday, December 10 until Friday, December 14.

A week that celebrates our place as citizens of the world, not just a nation, and encourages young people to be more aware of the conditions in which people their age around the world are living.

In order to build a two classroom rural school in Malawi along with two pit latrines, the campaign needs to raise a total of €11,000.

To do this schools in the area are invited to take part in ‘Christmas Jumper Friday’ on December 14 where students can donate €2 to wear their Christmas jumper to school.

Of course Nicole’s not trying to prescribe actions from the top down, any school that wants to take part is welcome to come up with their own fundraising ideas.

The ‘Let’s Make it Happen’ campaign is kicking off at Presentation College in Headford, where Nicole is doing her placement.

She’ll be helped in this work by the Transition Year students she’s mentoring, where a group from the TY Maths class are creating a Statistical Research Project to show the contrast between the developed and developing worlds.

NUI Galway’s School of Education is throwing its weight behind this campaign, commending this effort to improve education around the world as promoting the best principles of the course.

Dr. Cornelia Connolly, joint programme director of the BA Mathematics and Education praised Nicole for her drive, saying that it exemplified the “caliber of pre-service teacher” they produce and that she has the school’s full backing.

“My aim is to bring people on this social venture where we work towards one united goal,” Nicole said.

“The aim is to construct this Post Primary School, while also establishing lasting connections with a rural community on the other side of the world, our world.”

For more information on the project Nicole can be contacted at n.loughlin2@nuigalway.ie or contact Dr Cornelia Connolly, NUI Galway’s School of Education, at cornelia.connolly@nuigalway.ie.