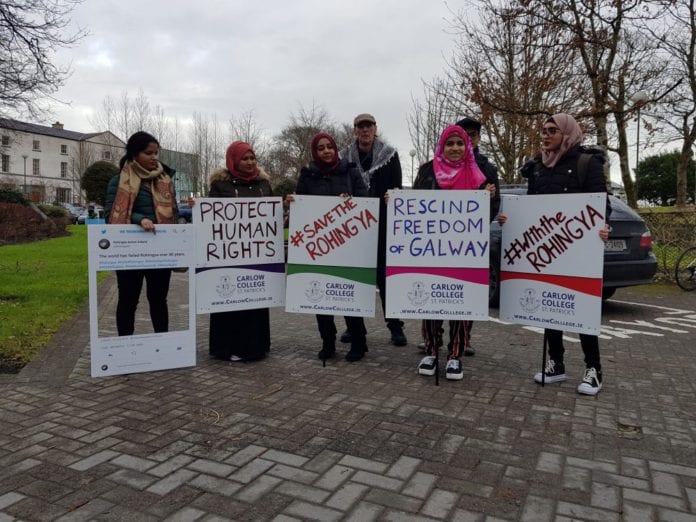 Galway city council decided today to strip the Freedom of the City from Aung San Suu Kyi for her silence on the genocide being perpetrated against the Rohingya people by the military in Myanmar.

Suu Kyi was given the Freedom of Galway City award in 2005 while she was under house arrest by the ruling military junta for her work promoting peace democracy.

Today the city council voted to revoke that freedom award. 13 councillors voted for the measure, two abstained from the vote, and three were absent from the chamber.

In the time since her release the Nobel Laureate has been accused of enabling vast human rights abuses by refusing to outright condemn crimes perpetrated against the Rohingya.

Myanmar’s military has been accused of carrying out a genocide in the Rakhine state by killing thousands, carrying out mass rape and the destruction of villages.

Hundreds of thousands more have fled the country, with the majority stuck in refugee camps in Bangladesh.

Suu Kyi has long denied that Rohingya are an ethnic minority with a right to live in Myanmar.

Rohingya Action Ireland have been lobbying the council for over a year to rescind Suu Kyi’s award in light of her more recent actions.

A group from Rohingya Action Ireland staged a demonstration outside city hall before the council meeting.

Noor Fatema with RAI said they want the Rohingya in Myanmar to have the same basic rights to live and receive an education that they have found in Ireland.

Councillor Frank Fahy questioned the effect that taking her award could have on Mrs Suu Kyi, or if she’d even notice.

“If you handed her a map of the world and asked her to point out Galway, she’d struggle,” the councillor said.

Mayor of Galway Niall McNelis agreed that taking her award was largely symbolic, but said that it, “Gives solidarity with those in our community who have asked for this.”

Councillor Colette Connolly questioned whether rescinding this award meant the council should reexamine all those who have been granted Freedom of the City in the context of history.

She referred to Ronald Reagan’s arming of mujahideen in in Afghanistan and certain members of the clergy who have also been honoured.

The independent councillor proposed a separate motion calling on the city to endorse a UN report calling for the Rohingya genocide to be referred to the International Criminal Court.

It also called for Aung San Suu Kyi to recognise the Rohingya as an ethnic minority of Myanmar and grant them citizenship.

The council also voted to back this motion.