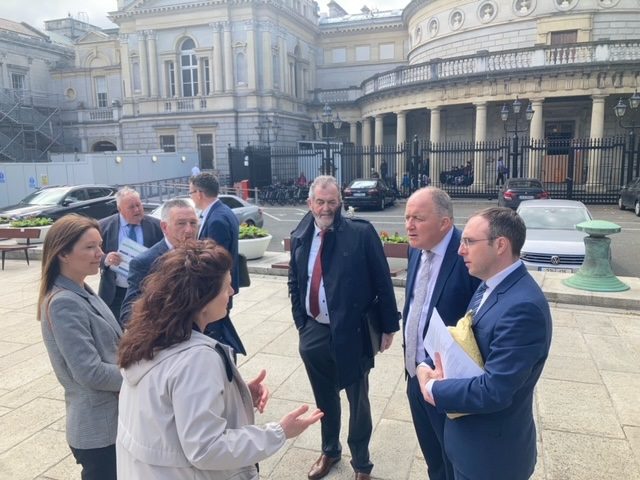 The Committee spent much of Wednesday and Thursday reviewing the challenges that Tús and the Rural Social Scheme are currently facing and the call for collective discussions to resolve these issues.

Clement Shevlin, Strategic Organiser of SIPTU, credited Galway Rural Development’s RSS and Tús officers for forward what he described as “a very concise and thought-provoking contribution” to the Dáil committee.

Speaking to the Committee, Liz Macdonald, Supervisor of GRD’s Rural Social Scheme, said that the RSS is a unique programme that provides financial support to low-income farmers to sustain their livelihood, and in return they contribute enormously to rural groups.

“It was important to express its value in rural Ireland so that TDs understand both the issues, and the potential for the scheme,” she said.

“Tús too is such an invaluable programme. The benefits of both schemes for participants include a stable income, better mental health and wellbeing, and the provision of training and up-skilling, while simultaneously providing direct benefit to local communities by allowing participants support charities and community organisations to maintain their services.”

That view was echoed by Senior Manager of the RSS and Tús programmes at GRD, Sean Broderick.

“Today was a significant day and we were proud to make the case for community groups, rural dwellers, and our participants.

“It is important that the schemes get the support they deserve, and that the Supervisors of these schemes have adequate supports, pay and conditions.”

Commenting for GRD after the meeting, Sean Larkin highlighted that GRD are among the largest programme operators in the country so feel an acute responsibility to highlight the areas needing intervention.

Among these is the need to broaden the rules on the schemes to allow greater participation, thereby allowing for a greater contribution back to communities.

Issues on the pay and conditions for Supervisors and Participants were also raised.

“The role of Supervisors on the RSS and Tús Schemes has developed over the years and, with that, the amount of administration required has grown,” said Sean.

“This increase in workload is not reflected with pay and this needs attention.”

The areas of pension, maternity leave, and more were also discussed.