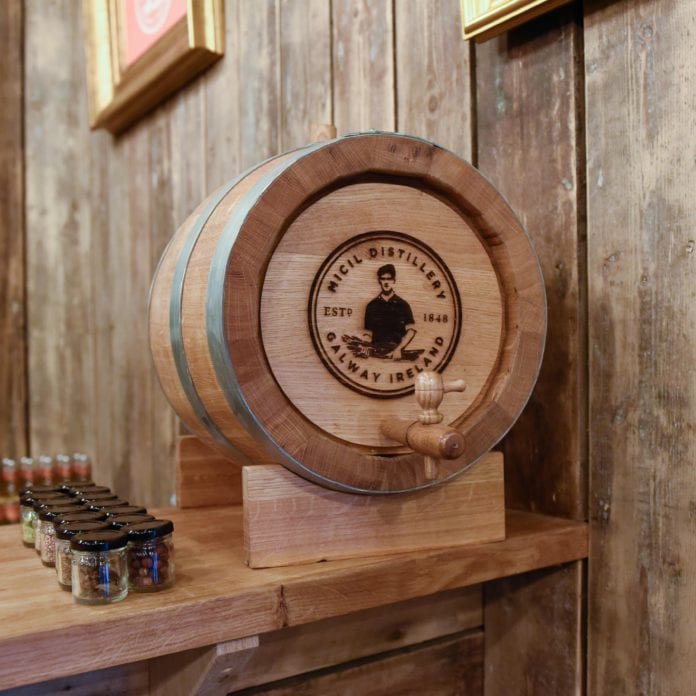 A Galway family which has been distilling poitín for over 170 years has taken the extraordinary decision to pause production of their hand-crafted spirits for the first time.

The Micil family has stopped producing spirits temporarily so that it can free up the distillery’s supply of alcohol – and begin manufacturing antibacterial hand sanitiser.

The decision was taken by Micil Distillery’s founder, Pádraic Ó Griallais, from Indreabhán in Connemara, who is a sixth-generation poitín distiller.

He said that like many others, they had been looking to their neighbours abroad to see how the situation was developing when they discovered that distilleries in the US and Scotland had started producing hand sanitiser due to shortages.

Conscious that similar issues were arising here in Ireland, he was eager for the family’s distillery to provide a solution.

“The problem we faced unfortunately was as such a small-scale family distillery, we were unsure logistically how we could upscale our production to make the quantities of alcohol required,” he explained.

“We also had to factor in the excise duty on spirits which, at almost €43 per litre of pure alcohol in Ireland, was making the costs appear prohibitive.”

Upon hearing that the Revenue had waived the excise duties for some of the larger corporate distilleries in Ireland to allow them to produce hand sanitiser, a determined Ó Griallais reached out to them with a similar request.

Last week, his local Revenue office, along with the HSE and the Department of Agriculture, granted Ó Griallais these same permissions which meant that he could afford to change his business model and manufacture for the worthy cause.

Although Ó Griallais found himself facing yet again another challenge, this time in sourcing packaging for the sanitiser, the entrepreneur was unwilling to admit defeat and put out a call for help via the Micil Distillery social media channels.

The request received an overwhelming response, and through the help of this online community, Ó Griallais was able to connect with a supplier.

He will begin production of the very first batch of the Micil Hand Sanitiser which will be made by hand at the Salthill distillery next week.

Getting in touch with a number of Galway based charities and care facilities, as well as hospitals and medical centres, Ó Griallais was eager that the first batch of Micil Hand Sanitiser go to the organisations that need it most.

Micil Distillery has also received a substantial number of orders from local businesses, which means the team will be working hard to meet demand from the moment production commences.

Ó Griallais is considering selling the sanitiser to other local businesses provided there is a commitment to take only a small margin, ensuring the product is affordable to everyone. However, for now, his attention is focused on fulfilling the list of existing orders.

Speaking about the pivot in Micil’s business model, Ó Griallais said: “Last week we found ourselves facing a period of huge uncertainty in terms of our business’s survival.

“We were unsure if we would be able to make it through the storm in light of the recent closure of the bars to whom we supply our spirits, as well as our visitor centre here in Galway, another stream of income that our business relies heavily upon.

“However, we were conscious that we were not unique in this and so, rather than worry about what the future held for Micil Distillery, we decided to re-focus our energy into doing what we could to help in the face of a national and global crisis.

“This is not about profit for us, we’re hoping to sell the hand sanitiser as close to cost as reasonably possible, and donate it for free to those who can’t afford to pay.

“When all of this is over, we want to be able to look back and know that we did our best to support the most vulnerable in our local community, as well as those at the frontline helping the people who need it most.”

While spirit production at Micil Distillery has totally shut down for the moment to allow the team to concentrate fully on the hand sanitiser production, limited stocks of the traditional poitíns and award winning Connemara gin are still available from stockists such as McCambridges in Galway as well as other leading off-licences nationwide.