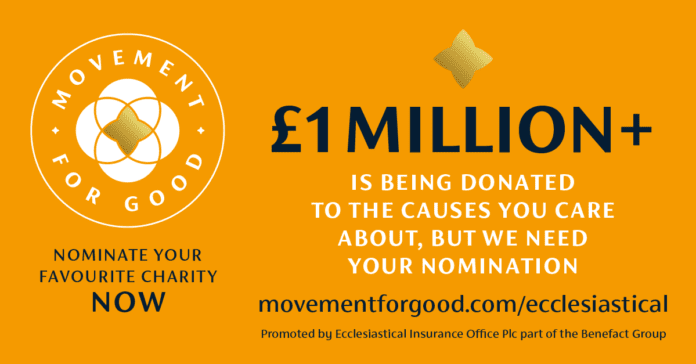 People in Galway have been invited to nominate a charity close to their hearts in this year’s Movement for Good Awards which was launched this week.

For the fourth year running, Ecclesiastical and Benefact Group are giving away over €1 million to good causes, and the chosen charities will be awarded €1,000 during the campaign.

It is quick and easy to nominate, and the public can vote for their favourite charity online at movementforgood.com.

“We were thrilled to receive so many nominations from the public over the past three years, and in 2022 we are encouraging even more people to nominate a charity of their choice.

“Thank you on behalf of the 1,500 charities that have already benefited from the awards and the members of the public who voted for them.”

He said that the pandemic, the current rising cost of living and other external factors have had a huge impact on charities with many facing financial difficulties.

“Our Movement for Good awards will continue to help charities at a time when they need it most, and we know that for many charities, €1,000 can make a real difference,” said Mr Lane.

“Ecclesiastical is a unique financial services group. We are owned by a charity, which means all available profits can be given to the good causes that are so important to our customers. As a company whose purpose is to contribute to the greater good of society, charitable giving is at the heart of our business.”

Winners will be drawn at random and the more times a charity is nominated the more chance it has of being selected.

A further 120 €1,000 grants will be given away in December and €500,000 will also be given in larger grants later this year. For more information about the awards visit www.movementforgood.com