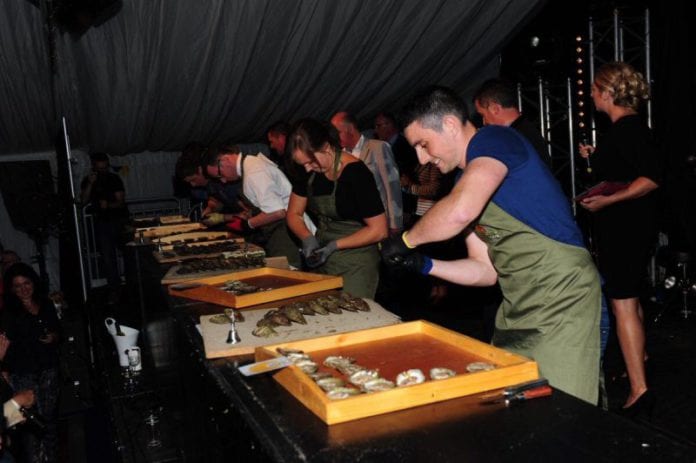 National Geographic Traveller has declared Galway Oyster and Seafood festival to be one of the best food and drink festivals in the world.

It put the annual “gourmet extravaganza” at Nimmo’s Pier second on its list of the 25 best food and drink festivals to be found anywhere in the world.

It narrowly missed out on the top spot to the Maine Lobster Festival in the US.

Founded in 1954, Galway Oyster and Seafood Festival is the oldest of its kind anywhere in the world.

Taking place every year on the last weekend of September, the festival celebrates the beginning of oyster season, which runs all through the winter and spring until April.

Kick off the weekend on Friday September 28 with the Irish Oyster Opening Championship and cheer on the Openers. (Though if you cheer for someone from the east over the best of Connemara’s seafood community you’re legally obliged to move).

The competition goes international on the second day at the headline World Oyster Opening Championships where “22 International Openers will shuck it out for the crown of World Champions, with bands to keep the party going all day long.”

The competition starts at 1:30pm with a Competitors’ Parade making its way down from Eyre Sq. to the festival marquee at Nimmo’s Pier.

That night things get wild with the Masquerade Mardi Gras where fabulous finery and fine food meet, starting at 8pm and carrying on well into the early hours of the morning at venues around the city.

Festival goers are encouraged to, “Join in, make new friends, throw caution to the wind and dress as extravagantly as you dare!”

The final day is for free family fun (I’m really getting into all this alliteration with f’s) down at the Marquee with the Féile Bia na Mara.

The 2018 Oyster Festival is also the launch of the 2018 Bay Coast Seafood Trail.

Taste the Atlantic as you travel from Galway Bay, along Connemara and finish up in Achill, Co. Mayo stopping at some of the best seafood producers in the world along the way.

The 64th annual Galway Oyster and Seafood Festival in on next month from September 28 – 30.

A full programme of events will be announced shortly.

Tickets for the main events are already available at the festival’s website.