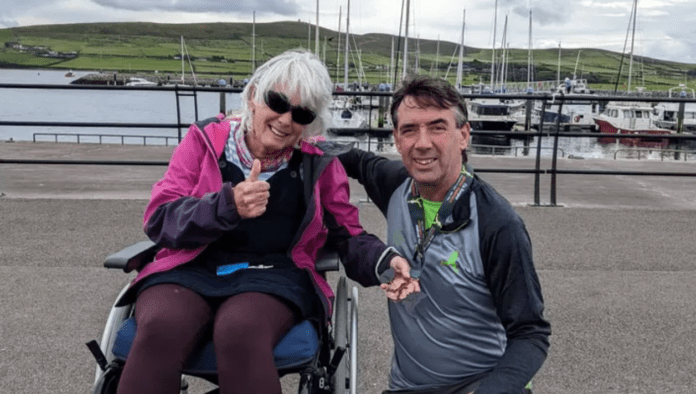 Galway man Declan Connolly is set to take on the Dublin City Marathon at the end of October in aid of the MSA Trust and Galway Parkinson’s Association after his wife Debbie’s diagnosis in 2020.

Debbie was diagnosed with Parkinson’s Disease/ Parkinsonism in January 2020, but as additional symptoms appeared, her diagnosis was this year changed to Multiple System Atrophy (MSA).

Declan says that the disease is ‘cruel and unforgiving’.

On the fundraising page on GoFundMe, where over €4,400 has been raised so far, Declan says that this time three years ago, Debbie was walking, hiking, cycling and swimming – doing all the things we all take for granted.

Today, she mostly uses a wheelchair to get about, with speech and swallow becoming increasingly difficult, and she requires assistance with most daily activities.

But despite all of this, he says Debbie still retains an incredible zest for life and smiles and laughs daily.

“Since Debbie was diagnosed with MSA, these two organisations have been enormously helpful.

“These two charities both run entirely off donations, so we want to be able to do our little bit to help these charities to continue helping those affected by MSA and, hopefully, in the process, create some awareness about Multiple System Atrophy.

“Any contribution of any amount will be greatly appreciated, with all the donations to be split 50/50 between The MSA Trust UK & Ireland and Galway Parkinson’s Association.”