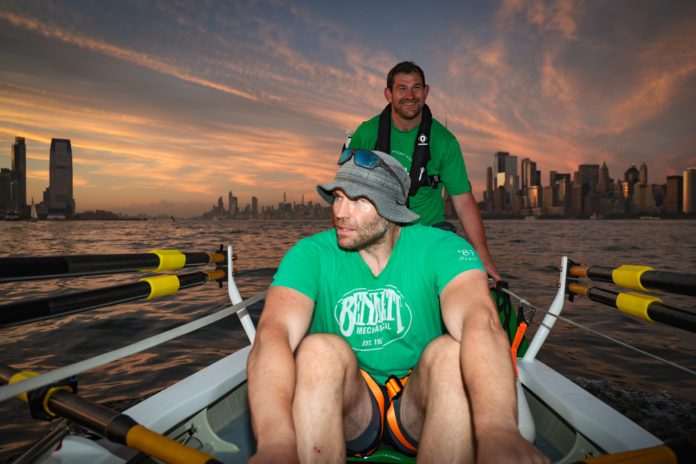 Damian Browne is expected to complete his extraordinary New York to Galway row tomorrow, Tuesday, with the Galway man less than 100 nautical miles from his final destination after over 100 days at sea.

Having left the Big Apple on 14 June, Browne is estimated to arrive in Galway Docks at around 10.30am on Tuesday.

The arrival is slightly later than originally expected due to the adventurer having to deploy his para anchor for a number of days due to adverse weather conditions.

Browne left the States accompanied by his lifelong friend Fergus Farrell, unfortunately Farrell had to leave the project after a couple of weeks having experienced tightness in his chest.

Farrell’s efforts at the initial stage of the journey played a huge part in safely navigating the most difficult section of the crossing.

The journey, which has been entitled Project Empower, is part of a fundraising effort for four charitable organisations: National Rehabilitation Hospital Foundation, Ability West, Madra and The Galway Simon Community.

Those wishing to support the event and their charity partners can do so by visiting idonate.ie/projectempower2022.

Upon completion the former Connacht and Leinster forward Damian will become one of only a few individuals to have rowed the Atlantic both ways having crossed from San Sebastian to Antigua in 2018.

“When I started out on this project some 3.5 years ago, the final destination was clear from the start; Galway. Home,” said Damien.

“The great hope with this was to give the next generation of kids in the West and throughout the country a real image and touchable action to emulate and hopefully inspire them to dream big and work hard in whatever avenue of life they decide to explore.”

He said that after 112 days of stresses, strains and doubts only an endeavour like attempting to row 3000 miles across the unforgiving North Atlantic can elicit, he is ‘incredibly excited to close out this beautiful project’ in his hometown, surrounded by my family, friends and supporters.

Project Empower continues and the journey can be followed at projectempower.ie at the Project Empower social media and in Damian Browne’s podcast – Deep Roots.