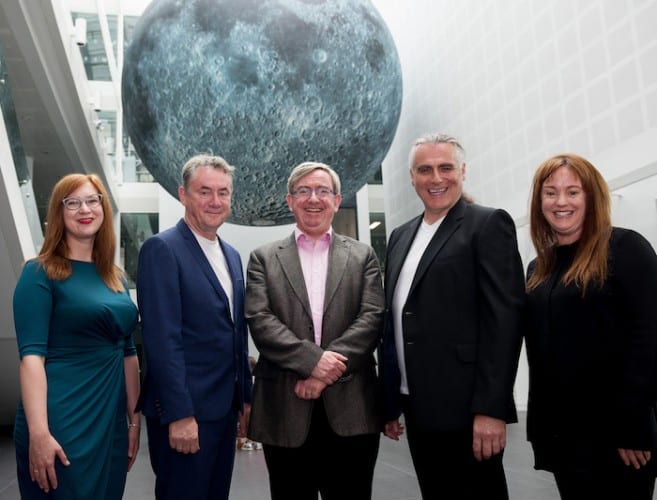 Galway International Arts Festival has signed a multi-year partnership with NUI Galway on a number of initiatives to provide cultural and artistic opportunities for students.

The Arts Festival will work the university to see how it can complement the existing culture-related courses provided by NUIG.

In addition, NUIG’s Alive volunteer programme will work more closely with the Arts Festival to get more students helping out, and exposing them to every strand of music, theatre, talks, and other performances that go on.

NUIG has been an Education Partner with the Galway International Arts Festival since 2011 and made campus facilities available for shows and exhibits.

This year the Museum of the Moon, with its large scale replica modeled off  NASA images, was housed at the Human Biology building.

“It is a natural fit for the festival, as it is hoped the University will produce the graduates who will have a major role developing, producing and working on new productions in the future.”

“The association with such work further reinforces the University’s culture campus brand with audiences wherever the work is seen, while also further building the Galway brand internationally.”

The new partnership was prompted by Galway’s designation as the Capital of Culture 2020, and the announcement of the government’s new Creative Ireland programme.

Going forward, all of the festival activities will be archived in NUIG’s James Hardiman Library, and the Arts Festival will work with the university to promote its new BA in Music.

The ‘First Thought Talks’ which premiered as a festival strand this year, opening with a talk by Uachtarán na hÉireann Michael D Higgins in the Bailey Allen Hall, will be further developed into an year-round event to be delivered on campus during the academic year 2018-2019.

President of NUIG Ciarán Ó hÓgartaigh said the university and arts festival are partners with, “a shared focus on harnessing the creative spirit of the region, which is such a cultural strength that results in work in many local sectors having an impact throughout the world.”

“As Education partner, we see our cultural hinterland as central to our mission and look forward to working with the festival over the coming years to support the next generation of creative artists, producers and cultural entrepreneurs.”

The 2018 Galway International Arts Festival, which ended on Sunday, looks like it blew past previous records by a wide margin.

Last year’s festival was the 40th anniversary and attracted over 200,000 people to Galway, but when it’s all tallied this year John Crumlish expects more that a quarter of a million people to have passed through over the two weeks.