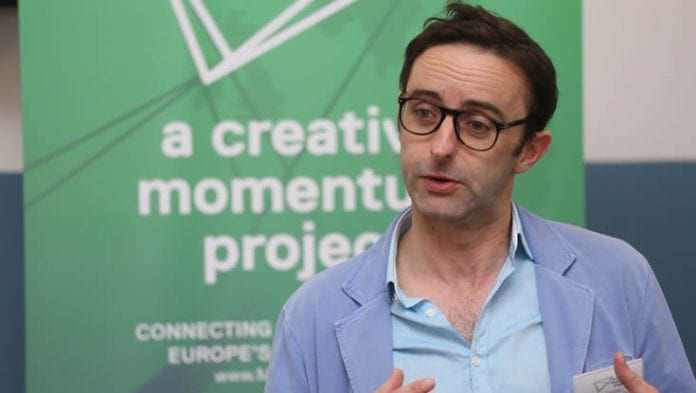 The Whitaker Institute and School of Geography and Archaeology at NUI Galway hosted an event this week as part of a creative exchange seminar titled ‘Screen Industries on the Periphery: Policy and Practice’, at the Huston School of Film & Digital Media as part of Galway Film Fleadh.

International practitioners from the North of Ireland, Finland, Iceland and Sweden talked about their experiences of working in film, TV and digital media. These practitioners are in Galway to attend this year’s Galway Film Fleadh and have been funded by NUI Galway’s a creative momentum project.

Speakers at the event included, Dr Conn Holohan from the Huston School of Film & Digital Media at NUI Galway who spoke about the influence of film funding in Irish cinema. Declan Gibbons from Galway Film Centre shared insights into running the UNESCO City of Film designation for Galway and their involvement in the Screen Talent Europe Network. Paddy Hayes, from the IFTA winning Galway-based production company Magamedia, gave a talk titled ‘Who lifts the mirror?’

Dr Patrick Collins, lead researcher on the project from the School of Geography and Archaeology at NUI Galway, said: “Creative pursuits are often lonely ones, in more peripheral regions this isolation can be heightened. On this occasion, a creative momentum focuses on film makers, bringing them together to hear about each other’s experiences and provide valuable insights into making sustainable creative careers in Europe’s more remote areas.”

A creative momentum project supports the development of the creative sector in five regions across Europe’s northern edge. One aim of the project is to support creative entrepreneurs through opportunities to network and collaborate across the five partner regions.

It is a well-known fact that participating in creative industry events in the regions helps creatives to connect with potential markets and audiences, as well as provide networking opportunities.

The cost of participating in such events can however be high and this project has selected five established events as ‘creative hotspots’ across the partner regions and funds relevant creative enterprises from the other partner regions to participate.

A creative momentum project is co-funded by the EU Interreg Northern Periphery and Arctic (NPA) Programme 2014-2020. The project operates the My Creative Edge website, which is a three-year, €2 million transnational project being implemented by six organisations across five regions.

The website showcases the work of businesses and freelancers working in the creative industries sector in Mid-Sweden, North East Iceland, Northern Finland, South East of Northern Ireland and the West of Ireland.