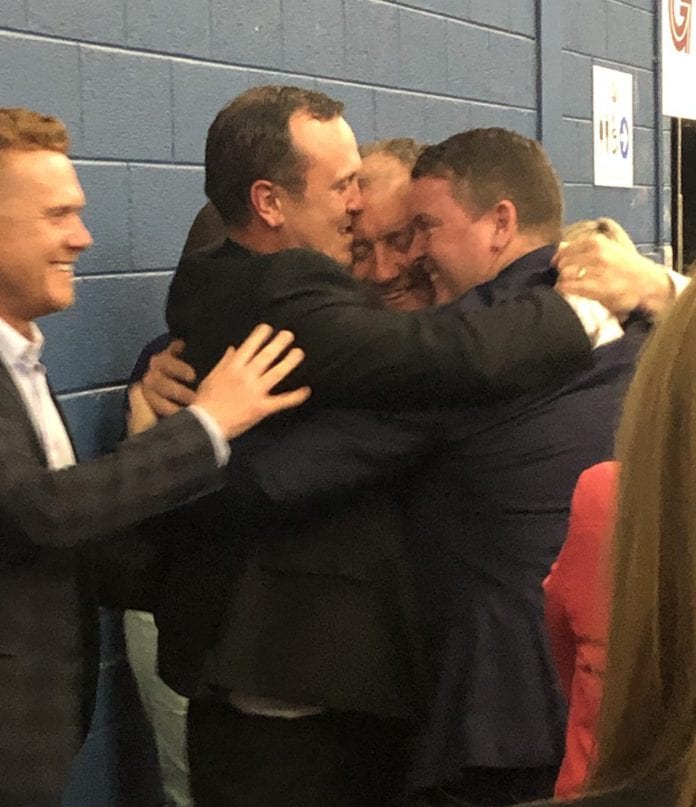 The chant of “Champiole” echoed throughout the Westside count centre on this weekend as Fianna Fáil celebrated a hugely successful city council election.

Fianna Fáil representatives and supporters celebrated as five of their candidates ended up being elected to the city council in the local elections this weekend.

This is an increase of two Councilors making Fianna Fáil the largest party on the City Council for the first time since 1999.

In the Galway City West Ward Fianna Fáil obtained 19.8% of first preference votes. This was slightly larger than Fine Gael’s 18.5%.

In this ward, Peter Keane was comfortably elected for Fianna Fáil. He obtained the 4th highest vote share with 10.9% of first preference votes.

John Connolly was eventually elected on the 9th and final count after transfers were distributed.

The Galway City Central Ward was Fianna Fáil’s weakest area where they captured 18.6% of the first preference vote share. This was slightly less than Fine Gael’s 19.3%.

Ollie Crowe comfortably retained  his seat in the central district while his party colleague Imelda Byrne missed out.

Ollie Crowe received a first preference vote share of 12.6% with 1006 votes. This was the second highest vote share behind Independent Mike Cubbard.

The strongest performance for Fianna Fáil came in the Galway City East Ward where it obtained 23.2% of the vote, by far the largest of any party.

This large vote share allowed them to get two Councillors over the line for a strong boost to their presence.

The party will no doubt hope to build on this going forward as they look to get a second seat in the Galway West-South Mayo Constituency in the next General Election.

Elected Councillor John Connolly ran for Fianna Fáil in the general election 3 years ago after previously serving as a city councillor.

The fact he is now a once again a sitting Councillor will only help his efforts should he choose to run again.