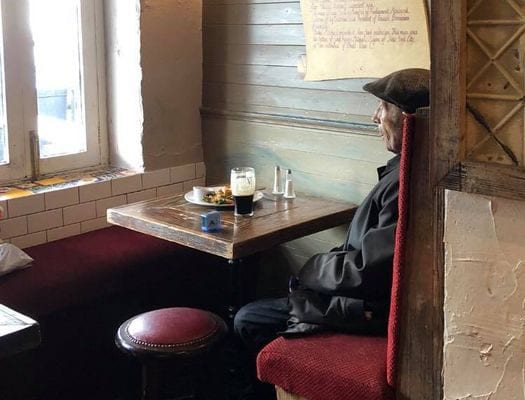 People across Ireland have been heartbroken by a picture which lays bare the day-to-day reality of Covid restrictions for many elderly people across the country.

The picture shows an elderly man sitting alone with a pint of Guinness in McGinn’s Hop House in Galway City, where the picture was taken with the man’s permission.

He took a small clock with him to the pub and placed it on the table beside his pint, so that he didn’t stay longer than the 90 minute time limit.

A staff member took the picture in the bar with his consent, before he was helped out to his taxi.

There was a huge reaction to the picture online, with many locals offering to buy the man a pint in the future, while others displayed their anger at the government’s strict COVID restrictions.

Some commented on the effect the pandemic has had on ordinary people across the country – in particular older people.

One Facebook user said: “This poor man probably misses being able to sit at the bar n chat to whoever comes in, sad times. I know my own dad won’t go for a pint now for that very reason… government have no thought process when it comes to the elderly, just look how they failed the nursing homes!!”

Another commented: “We should ask every member of the Government to comment on this photograph, and to see what you are doing to elderly people all over the country. Hit the soft targets, ignore the real issues. I hope ye are proud of yourselves.”

Some took issue with the rule that forces people to buy food, with one person saying: “Awh the poor devil….it’s not fair forcing them to eat the food either just so they can enjoy a few pints.. most elderly people eat smaller portions & are used to eating at home.they didn’t grow up eating out & like plainer foods.. the older generation are suffering the most in this pandemic. they are in their last few years of life. Give them a break.”

It is understood Pubs which don’t serve food will be able to reopen later this month, and one user commented: “Thankfully he only has to wait till the 21st.”