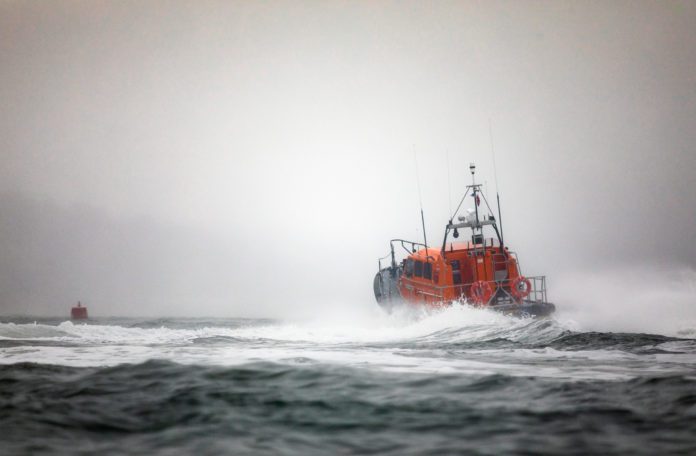 Six Galway RNLI lifeboat crew will be waiting for the call to drop their festivities and head out to sea over Christmas for the first time this year.

During the festive period from Christmas Eve to New Year’s Day over the last five years from 2017-2021, RNLI lifeboats in the Irish region launched 55 times and brought 43 people to safety.

Galway RNLI crew member Ian Claxton is originally from Dublin but has lived in Galway city for 15 years. A father of four, it was his love of the ocean that drew him to the RNLI two years ago.

“I was a lifeguard when I was younger and I am an experienced sea swimmer and was part of a team that swam around the Island of Ireland in 2006 raising €70,000 for the RNLI.”

“I also coach with the Blue Fin swimming club and am a member of Galway’s vibrant open water swimming community so I wanted to give something back and do something that could make an impact within the community.”

While Ian joined the crew in 2020, due to the pandemic and the impact on training and assessments, it wasn’t until this year that he received his pager.

“It has been a great experience and I have learned a lot,” he continued. “I didn’t have much experience previously around boats as I was more in the water than on it, but the RNLI training has been exceptional, and I am always learning something new.”

“I have been on two call outs to date and have found that there is a great bond between the crew when you are on the lifeboat,” Ian added.

“It’s exciting as the adrenalin kicks in and then the training kicks which makes everyone feel safe and in control and there is always a lot of communication happening between crew on the lifeboat and the station which is great.”

But these rescues would not be possible without donations from the RNLI’s generous supporters, helping to fund the essential kit, training and equipment needed by lifeboat crews all year round.

To make a donation to the RNLI’s Christmas Appeal to support their lifesaving work, go to RNLI.org/Xmas.

“Even at Christmas, our lifesavers are ready to drop everything at a moment’s notice and rush to the aid of someone in trouble on the water,” Ian states.

“At this time of year, the weather is at its worst and lives are on the line. We know that every time our crews go out, they hope for a good outcome, but sadly this sometimes isn’t the case.”

“There’s no feeling quite like bringing someone home safe to their families – especially at Christmas. As lifeboat crew we couldn’t rescue people without kind donations from the public which fund the kit, training and equipment we need to save others and get home safely to our families.”