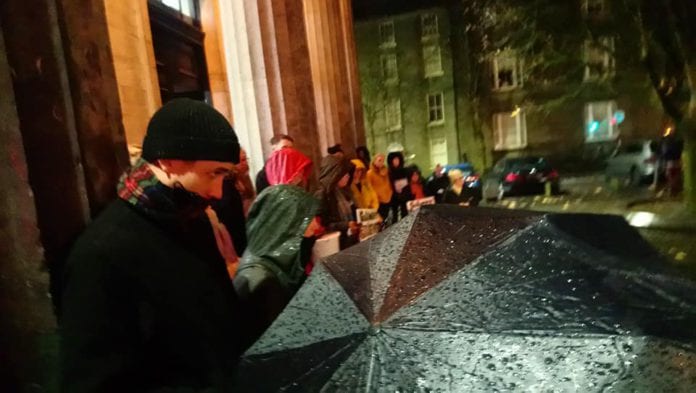 At least fifty people turned out to rally at Galway Courthouse Tuesday night despite wind, rain, and single-digit temperatures.

They braved the inclement weather to protest a Cork rape case in which a barrister used the alleged victim’s lacy underwear as proof of consent.

The defendant was acquitted of the crime – but many were outraged at the use of the clothing as evidence.

According to the Irish Examiner, defence barrister Elizabeth O’Connell asked that the jury think about what the complainant was wearing.

“You have to look at the way she was dressed,” O’Connell was quoted as saying.

“She was wearing a thong with a lace front.”

Yet myths linking clothing to sexual assault have been debunked, perhaps most effectively by recent art exhibits in Brussels and the Midwestern US called ‘What were you wearing?’.

Over the weekend, Twitter blew up with women posting photos of their underwear with the hashtag #ThisIsNotConsent.

The campaign – started by I Believe Her Ireland – slams the “wholly unacceptable comment” by O’Connell.

Counsel for man acquitted of rape suggested jurors should reflect on underwear worn by the 17yo complainant. Following this wholly unacceptable comment, we are calling on our followers to post a picture of their thongs/knickers to support her with the hashtag #ThisIsNotConsent pic.twitter.com/ZkVU0GVAIN

It also seeks to demolish what many women see as a culture of victim-blaming in sexual assault cases in Ireland.

Hundreds protested the comments in Dublin, Limerick, and Galway.

Meanwhile in Cork, crowds of activists left underwear on the steps of the courthouse.

Protesters place underwear on the steps of the courthouse in #Cork city during #thisisnotconsent protest pic.twitter.com/pY4Dk9dIc8

The Galway rally was organised by People Before Profit Galway to oppose sexism and victim blaming in the Irish legal system as well as show solidarity with sexual assault survivors.

Protesters spoke eloquently on issues ranging from the handling of rape cases to the #metoo and #ibelieveher movements.

Rally organiser Emma Lennon of People Before Profit Galway said that she was prompted to act after reading about the Cork trial.

“I thought it was equally as shocking as what happened in Belfast, and a similar movement should take place to resist sexism and rape myths used in court to place doubt in the jury’s mind,” she commented.

“Going forward we will look closely at other rape cases and see how the claimant is treated and push for reform in how these cases are dealt with.”

The rally also raised more than €100 for the Rape Crisis Centre.