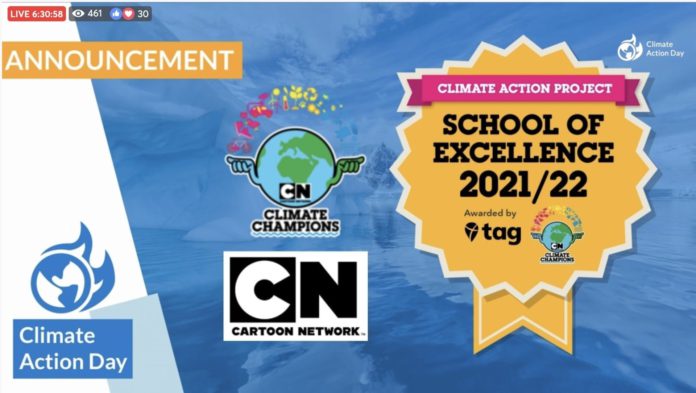 Clontuskert National School achieved an incredible first for Ireland in being one of the select to receive an international climate award at the COP26 conference.

The Ballinasloe School is the first in Ireland to ever win the Climate Action Project Schools of Excellence Award.

Awards were given to 250 schools around the country on November 4 at the COP26 Climate Conference taking place in Glasgow.

Galway Senator Aisling Dolan praised the students of Clontuskert NS, and the 2.7 million school children  around the world who took part in the Climate Action Project, for bringing their work to the attention of “world leaders and environmental experts” at the conference.

“These students in Clontuskert are real trailblazers on climate action Principal Kate Murray and her staff are wonderful role-models leading the way with children becoming champions and advocates for change.”

For their part in the project, a collaborative network of schools in 145 countries, Clontuskert students produced a video on a campaign to ban plastic on fruit and vegetables in supermarkets.

“The whole community are so proud of this school and they have been winning awards for years,” Aisling Dolan added.

Other awards Clontuskert NS has racked up over the years include Microsoft Showcase School, Green Flag School, Digital School of Distinction, and other prizes from the Galway Science & Technology Festival, and Discover Science.

“As spokesperson on Research, Innovation & Science – I’m so proud that St Augustine’s school in Clontuskert has achieved such an award. A great primary school in East Galway having such an impact at a global level and driving change.”

During the event, students and teachers presented questions to speakers, and showcased potential solutions for climate change.

The occasion also commemorated the 50th anniversary of the UN Environment Programme, reiterating the important role young people play in the future of environmental science, policy and action.