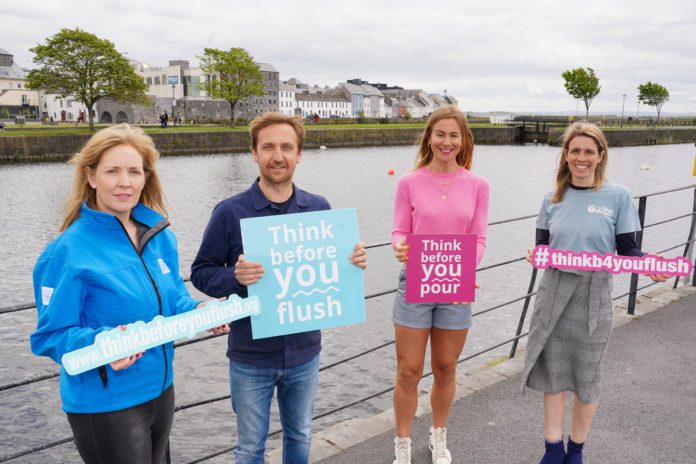 Almost 20,000 people living in Galway City regularly flush wet wipes, and other sanitary items, down the toilet, where they clog sewers and ruin beaches.

This was the result of a survey for the ‘Think Before You Flush’ campaign, which aims to help protect Ireland’s sandy beaches, shores and secluded bays.

In Galway, the city council is working with Irish Water and Clean Coasts to try and get people to think about what they are sending down the drain.

“In Galway City our message is simple, only the 3 Ps, pee, poo and paper should be flushed down the toilet,” Louise Dywer, Compliance Specialist with Irish Water said.

“All other items including wet wipes and other sanitary products should go in the bin, even if they are labelled as flushable.”

“The impacts of flushing the wrong things down the toilet and pouring FOGs down the sink are stark, as we are still removing hundreds of sewer blockages from our network every month.”

Removing such blockages is nasty work, with people having to descend into the sewer to hack away at them with shovels, blast them with high pressure water, or employ suction in a way that real doesn’t bear imagining.

“I’ve seen pump blockages that workers have had to literally clear by hand in order to get the pumps up and running again in a race against time to avoid sewage overflows,” Louise Dwyer said.

Mutton Island Wastewater treatment plant, the largest on the west coast, removes almost 100 tonnes of wet wipes and other each items every month.

This, Lousie illustrates, is the equivalent of eight double decker buses, all of garbage that was never meant to go in the toilet.

Galway City Council have been involved with the Think Before You Flush campaign as part of their Sustainable Business Initiative with Galway’s West End Traders Association.

“As part of the Green Business initiative, 33 Businesses and 1 School received their Think Before You Flush packs and will be promoting the campaign via social media posts.”

“Galway City Council are delighted to partner with Think Before You Flush and Galways Westend in this campaign’’.

In Galway’s West End the campaign is also encouraging the public and businesses to ‘Think Before You Pour’, and reduce the amount of Fats, Oils and Grease (FOGs) being poured down the sink.

FOGs are liquid when poured, but they cool and harden as they travel along the pipe network and can cause blockages.

When FOGs combine with wipes and other sewage related litter such as hair and dental floss fatbergs can form.

It’s every bit as disgusting as the name implies.