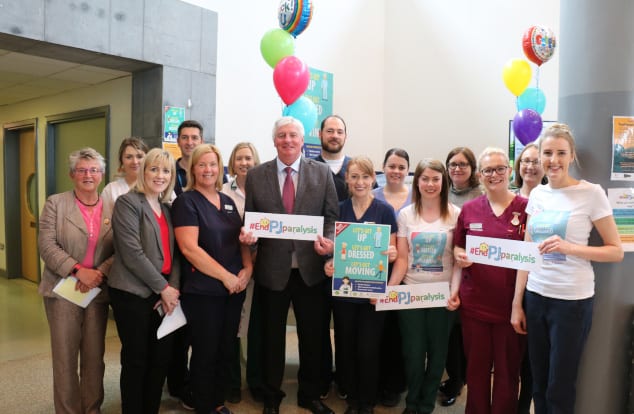 A new campaign to get people up and out of bed to reduce their recovery time in hospitals was officially launched at University Hospital Galway today.

‘End PJ Paralysis’ is a national campiagn to encourage people to stay mobile and get back into their daily routine, maintain independence and return home as soon as possible.

Chris Kane, General Manager at UHG said that when people are recovering from an injury or illness at hospital they try to encourage them to get up and dressed the same as they would at home.

“The ‘End PJ Paralysis’ initiative has been running on a number of wards since January and will be rolled out across the whole hospital,” he added.

“Based on the success to date, we hope to continue to improve the patients’ experience in hospital and reduce the length of their stay.”

The ‘End PJ Paralysis’ campaign has also previously been running at Portiuncula Hospital in Ballinasloe since March 15.

Speaking at the launch, Michael Lyster said, “I was surprised to learn how beneficial it is to get up and dressed while in hospital myself and the huge positive impact it can have on recovery, reducing the time spent in hospital and making it easier to adjust to life at home afterwards.”

Miriam Flatley, Senior Physiotherapist who has been involved in the roll out of the initiative said that the dangers of people spending too long cooped up in a bed are well documented.

Research has shown that one week of bed rest can result in a 10% loss of muscle density “especially in older patients”, she warned.

“This can be the difference between a patient being able to climb the stairs in their own home or not.”

“All staff are encouraging patients to get up and dressed each day and to take regular walks if possible.”

Not only is this the best course of action for the patient to look after themselves, said Debbie Belton, Clinical Nurse Manager, but it’s also improving the level of care they can receive from staff.

“Nurses report that patients are up and about earlier, leading to more time for direct patient care on the wards.”

Patients at UHG are being asked to pack day clothes and shoes, as well as pyjamas, dressing gowns and nightwear.

The hospital is even supplying patients with pedometers if they’re interested in keeping track of their physical activity.