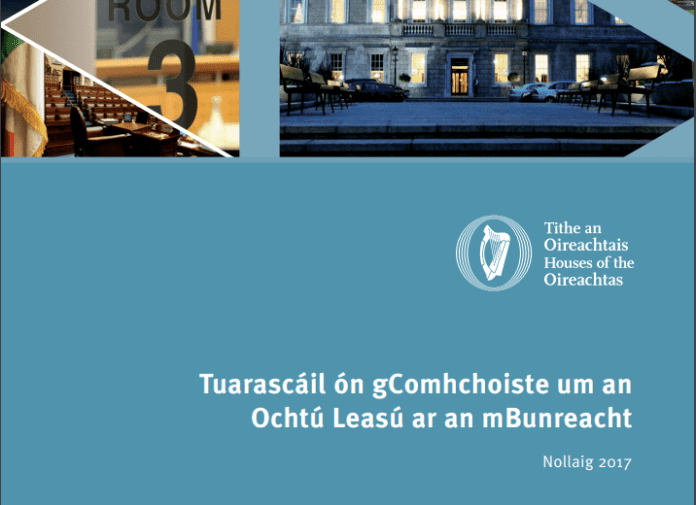 “We need some change and in order to effect that we need to amend the Constitution to remove article 40.3.3.”

The Oireachtas Committee on the Eighth Amendment has published its final report, calling for the removal of Article 40.3.3 of Bunreacht na hÉireann which puts the life of the unborn equal to the life of the mother.

Chairperson of the committee Catherine Noone said that after many years of public and political debate on the issue, the people will finally have their say.

She also pointed out that people under 52 years of age in this country have never had the opportunity to have a say on this matter.

The 40-page document suggests repealing the Eighth Amendment and allowing for terminations up to 12-weeks.

The committee became aware of the fact that the majority of terminations are for socio-economic reasons that are unrelated to foetal abnormality or to rape.

In addition, the Committee said that it is mindful of that group of women who, for financial, domestic reasons or immigration status cannot travel or procure abortion pills over the internet.

However, the Committee did not uphold the Citizens’ Assembly recommendation that termination of pregnancy should be lawful, up to 22 weeks gestation, on socio-economic grounds.

The Committee considered the distinction drawn by the Citizens’ Assembly as regards gestational limits
was unnecessary, and said that abortion after 12 weeks should not be provided for in this instance.

It also recommended that “the law should be amended to permit termination of pregnancy with no restriction as to reason provided that it is availed of through a GP-led service delivered in a clinical context as determined by law and licencing practice in Ireland with a gestational limit of 12 weeks.”

It further recommended that where terminations occur in such circumstances, “no criminal sanctions should apply”, and “in cases where a woman procures or seeks to procure an abortion for herself, the law should provide that,
regardless of circumstances, she is not guilty of an offence.”