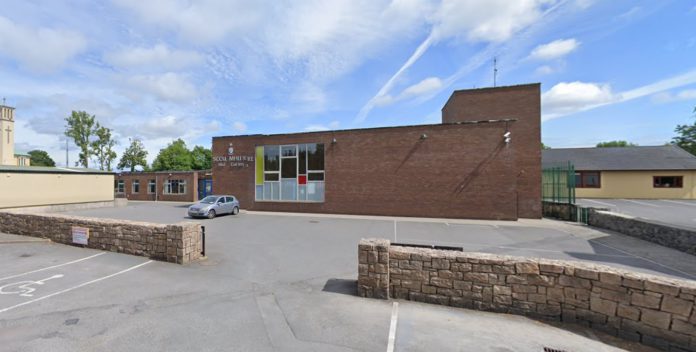 Plans for a new school building for Scoil Mhuire NS in Moycullen are progressing, with the design team due to report to the Minister this week.

Scoil Mhuire is a 400 student primary school on Church Road in Moycullen.

The school has been working for several years towards having a permanent new building constructed, and was included in the Schools Building Programme 2016-2021.

Inquiring about progress on delivering the new school, Senator Seán Kyne said that the project is “very personal” to him, as Scoil Mhuire is his old school.

“There were a lot of issues concerning the most appropriate site and the associated costs but a decision was made to rebuild on the existing school site.”

“In April or May 2020 sign-off was given for new and rather impressive prefabs that have since been installed.”

“They are quite modern and very large, which is a big improvement on what existed previously,” Seán Kyne said.

However, he added that since plans for the new school were first mooted in 2016, the lack of a planning application since then has concerned people.

The construction project will see the existing Scoil Mhuire building demolished, and all of the prefabs removed.

In their place a new school building will be built on the site, with 16 general classrooms and two special education classes.

Minister Josepha Madigan said that she is due to have a meeting with the design team regarding the project this Thursday, October 14.

The meeting will see the team submit a developed design for the new school, which be their chosen design option with an accurate cost plan.

“Following the planned stage 2a stakeholders meeting later this month, my Department will advise the school’s board of management and its design team of the further progression of the project”.

At this stage the project will be ready to move ahead for statutory approval, including seeking planning permission.