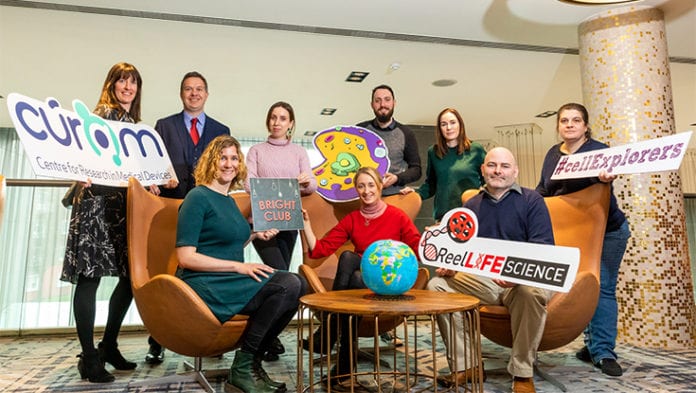 NUI Galway has been awarded €175,000 for five initiatives that aims to improve public engagement and education about science.

The funding from Science Foundation Ireland’s Discover Programme aims to reach 112,000 people, getting them interested in science, technology, engineering and maths this year.

The funding awards were announced by Secretary General of the Department of Business, Enterprise and Innovation, Dr Orlaigh Quinn as part of a national investment of €5.12 million.

Speaking about the funded projects, Professor Lokesh Joshi, Vice President for Research at NUIG said that it is part of the university’s culture to connect and communicate with people.

“Our researchers have an excellent track record in public engagement and have devised fun and engaging programmes to highlight the importance of STEM in addressing societal challenges. The support from SFI is particularly important in helping us to carry on inspiring minds.”

Bright Club, a variety show where academics try their hands at comedy, using humour to explain their research, has been awarded €49,862 in funding.

It has been running across Ireland for five years with over 70 live events and 200 academics trained, spearheaded by Dr Jessamyn Fairfield in the School of Physics at NUIG.

CELL Explorers is a public education and awareness programme where local scientists use hands on activities to get schoolchildren interested in science subjects.

This programme has been awarded €46,542 for their Escape Room coming during Science Week this year, where participants will have to solve biology based puzzles to get out.

The next award of €39,200 is going to Spaceship Earth, an incredible project where a team from NUIG and UL will help school students launch four high altitude balloons to the edge of space and back to earth.

The four balloons will carry specially chosen science projects and cameras up to an altitude of 30,000m in earth’s stratosphere to teach young people about scientific experimentation and the uniqueness of our planet.

The CÚRAM Young Minds project will see the medical devices research centre partner with local scientists and artists for a series of STEM workshops with families in Direct Provision.

Aimed at kids aged 4-12, funding of €28,135 has been granted for this project which will also distribute hundreds of educational toolkits to Direct Provision centres.

ReelLIFE SCIENCE is a nationwide science video competition where young people from schools and youth organisations are challenged to research a STEM topic and communicate it for the public via an engaging and educational three-minute video.

The deadline for entries is Friday October 16th, and the best videos are awarded €1000 and are screened for the public at the Galway Science and Technology Festival in NUI Galway.

This has been given the final award of €15,000 from Science Foundation Ireland.