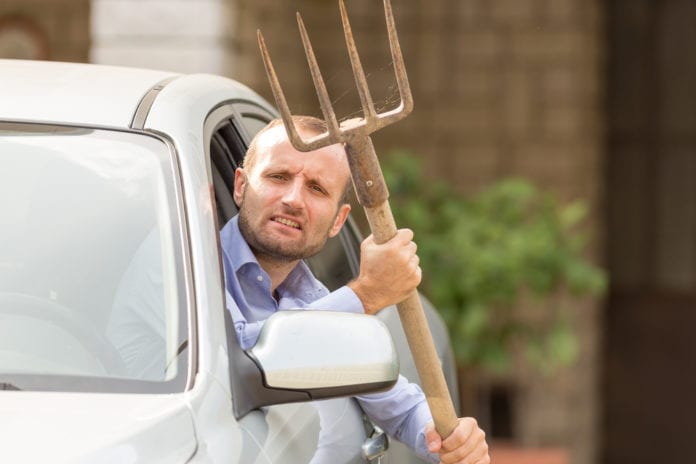 Gardaí were responding to a domestic disturbance last year when the accused man threatened to stick a pitchfork through one officer’s head.

David Shaughnessy (29), was charged with two firearms offences for making threats with a pitchfork and a hoe while gardaí were attempting to arrest him.

The court heard that on July 6 last year garda Patrick McPartlan and Pat Casey responded to a domestic disturbance call at 55 Glenbaun, Ballybane, the home of the accused’s mother, where he was staying.

Shaughnessy had been drinking heavily that day and was making threats against his mother.

When the gardaí arrived Shaughnessy’s mother met them at the front of the house and told them that he was in the back garden. She told the officers that she was afraid of him.

Garda McPartlan testified that when he and his partner confronted Shaughnessy, he produced a pitchfork and threatened garda Casey.

“I’ll stick this f*****g fork through your head or anyone else that comes near me,” he yelled, according to Garda McPartlan

The officers called for immediate backup. When Shaughnessy heard this he dropped the pitchfork and fled the fence over the fence of the back garden.

Shortly afterwards officers Casey and McPartlan found Shaughnessy in the back garden of no. 52 Glenbaun, where he again threatened them with a garden implement. This time, a hoe.

An armed response unit quickly arrived on the scene, at which point Shaughnessy exited the garden and surrendered himself to gardaí.

Judge Mary Fahy was incredulous that Shaugnessy would actually violently threaten a garda with a pitchfork,”He actually threatened a garda on duty. To stick him through the head.”

Solicitor for the defence Olivia Traynor said her client understand the gravity of the situation and was pleading guilty to all the charges.

“He can’t get away from the seriousness of what happened.” she said.

Speaking in his own defence, Shaugnessy said that he was up drinking all night previously and hadn’t slept. He also said that he never had any intention of actually attacking the officers.

Judge Fahy told him that was his own decision. She questioned whether Shaughnessy had consumed any other intoxicating substances, and asked him if he had any addictions.

Shaughnessy replied that he didn’t, adding that he doesn’t drink all that often but, “When I do drink I sometimes go a bit crazy.”

Ms. Traynor said that since the time of the incident Shaughnessy has found employment and is back living with his mother.

Shaughnessy’s father also appeared in court to support his son.

Garda Pat Casey was on duty when this case was called in the morning, but appeared later to testify.

“As soon as we arrived it turned into a very serious incident,” he said. According to garda Casey he tried to calm Shaughnessy down, but the more he spoke the more “demented” Shaughnessy became.

Judge Fahy asked garda Casey if the events of that day had affected him. Garda Casey said that he has become more cautious at work since then.

He added that a “more foolish” person might have approached Shaughnessy and been seriously injured.

Judge Fahy concluded by saying that despite Shaughnessey’s plea, the charges against him, particularly the threat with a pitchfork, were too serious for her to conclude the case that day.

She ordered testimonials to be produced proving that Shaugnessy was working and a Garda Behavioural Report be shown at the next hearing.

In addition she said Garda Casey should receive compensation for any distress the threats against his life may have caused, suggesting €1,000 as an appropriate amount.

The case was adjourned the case to October 10 for sentencing at a special hearing of the District Court.