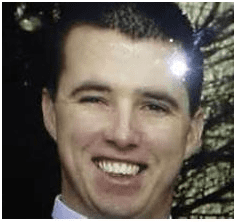 Gardaí have renewed their appeal for information on the murder of 29 year old Owen Maughan on the 9th anniversary of his death.

Maughan was fatally wounded when he was shot at a service station on the Moneen Road, Castlebar, Co. Mayo at 3:30pm on Wednesday, December 18 of 2013.

Owen and his wife Anne lived locally. They were married for eight years and had a very close relationship.

Early on the morning of the day he was killed, the couple went into town to run a few errands.

Later that afternoon, they went home and Anne prepared lunch. Owen left to go to a nearby service station to fill up some water canisters.

While he was at the service station, a number of shots were fired from a car, fatally injuring the young man.

The car is described as a BMW Estate car which was graphite grey in colour, which is known to have been stolen.

Gardaí say that the car was stolen from a hotel near Dublin Airport on December 6, less than two weeks beforehand.

Gardaí believe this vehicle was in the Dublin area for some time after this and would have refuelled a number of times.

The registration of the car was 06G3981. However, it was fitted with cloned registration plates, with the number 09D30024.

After the shooting, the car is known to have gone out the Claremorris Road and was discovered two days later at Derryvohey in Mayo, having been destroyed by fire.

Despite extensive Garda enquiries, no arrests have been made in relation to this murder investigation.

Nine years on, Gardaí and Owens’ family are appealing for people to come forward to assist with the investigation.

Gardaí would encourage anyone with information, no matter how insignificant it may seem, to come forward to them.