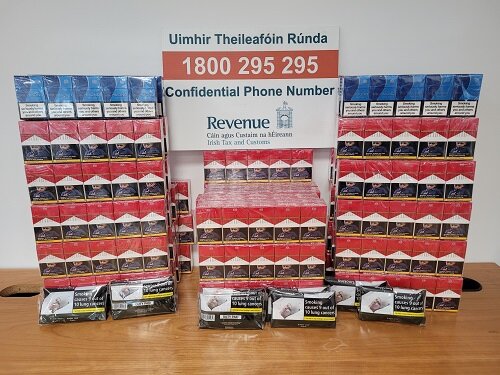 Contraband cigarettes and tobacco worth more than €16,100 were seized by the Revenue Commissioners in two operations in the west of Ireland this week.

On Tuesday, March 3 Revenue officers seized 11,240 unstamped cigarettes and 450g of ‘roll your own’ tobacco from a property in the Ballina area of Mayo.

The cigarettes branded ‘Marlboro Reds’ and ‘Richmond’, and tobacco branded ‘Amber Leaf’, had an estimated retail value of more than €8,700.

An Irish woman in her 50s was questioned in relation to this seizure.

That same day, another operation in the Enniscrone area of County Sligo resulted in the seizure of 10,400 cigarettes from a property.

The unstamped goods branded ‘Marlboro’, have an estimated retail value of more than €7,400.

Another woman was questioned in connection with this seizure according to the Revenue Commissioners.

The contraband seized between the two operations represented a potential loss to the Exchequer of approximately €12,800.