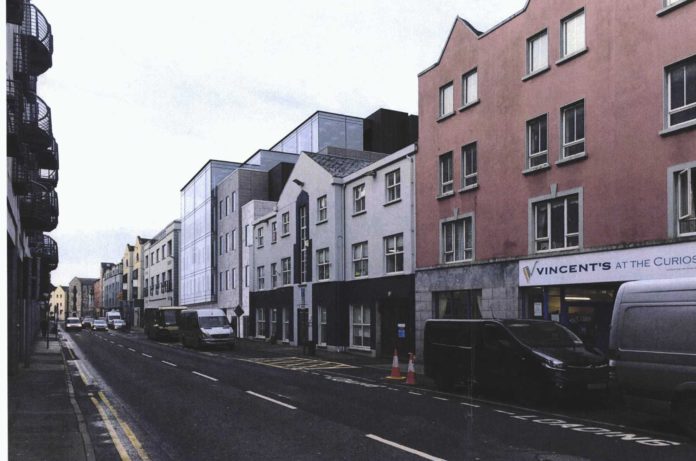 The O’Malley Group (Homes and Development) Ltd has received planning permission for an expansion of the Hynes Building on Augustine Street, and the construction of a new office building nearby.

This project will involve the addition of two new floors to the Hynes Building of office space, currently three stories in height, as well an extension of the ground floor which houses Galway City Library.

The project will involve the demolition of the building known as the St. Clare’s Walk building, and the construction of a new six storey office building complete with a junior library in its place.

The city council attached 15 conditions to its approval. Before any work commences the developer must pay a €117,500 contribution to the council towards the cost of transportation facilities in the area.

A contribution of €65,884 must also be paid to the council towards the cost of services which facilitate the office development.

The city council had previously rejected plans by the O’Malley group for the addition of three new floors to the Hynes Building, and the construction of a seven story office building in place of the current St. Clare’s Walk building.

The council refused permission then due to the scale of the proposal, which would have had an “overbearing” effect on the surrounding streetscape. An Bord Pleanála upheld the council’s decision after an appeal by the O’Malley Group.

The proposal was objected to by MetLife, the lease holders of the existing office space in the Hynes Building, on the grounds that they have not granted consent to the project.

The building work around the office space would interfere with their business interests and pose and health and safety hazard to staff coming and going from the building the objection stated.

The O’Malley Group, in its response to this objection, said that work would not be taking place in the section of the building currently occupied.

MetLife said that this response has “over-simplified” the nature of the work which will take place, which would “surround every aspect of MetLife’s offices”.

City Heritage Officer Dr Jim Higgins also expressed concern about the proposal, saying that it doesn’t take into consideration the “medieval core” of Galway City, and archaeological potential in the area.

“Any sub-surface work in the areas of proposed demolition must require an archaeological
assessment and on site licenced archaeological monitoring resolution and reporting. The documentation provided does not include a Conservation Architects report either. ”

He also said that the addition of new floors to the Hynes Building would create a “post-modern facade” to half of a building which was deliberately given a “pseudo 19th century” design when it was built in the 1980’s.

“The remodelling of half of the long building would make one half look ridiculous as well as out of character with the architecture of the streetscape with sharply contrasting finishes, materials, proportions and architectural styles.”

“Consideration should be given to planting a matching row of trees along the rest of the footpath taking in the entire length of the Hynes Buildings.”

A report from the Department of Tourism, Culture, Arts, Gaeltacht, Sports, and Media said that the flat roof of the Hynes Building holds Herring Gull nests from between March and August, and that any proposed works should not interfere with breeding birds.

But when the council asked the O’Malley Group for Further Information in response to this, they said that the entire flat roof is already covered by netting and that there is no possibility of birds nesting there.

A planning report for the project said that it is needed as the current St. Clare’s Walk building is “dated in terms of its appearance and efficiency” and would take significant investment to bring it to a useful modern condition.

“The demolition and reinstatement of a new state of the art office in its place would provide additional office space within the commercial core of the city, achieving an increased density of development that proves a more sustainable approach to the development of a city centre site.”

“The proposal will also see significant investment in the library, an important public amenity asset in the city centre,” the application stated.

The O’Malley Group also said that the reduced scale and redesigned proposal for the additional floors on the Hynes Building overcome the council’s original reasons for refusing planning permission.