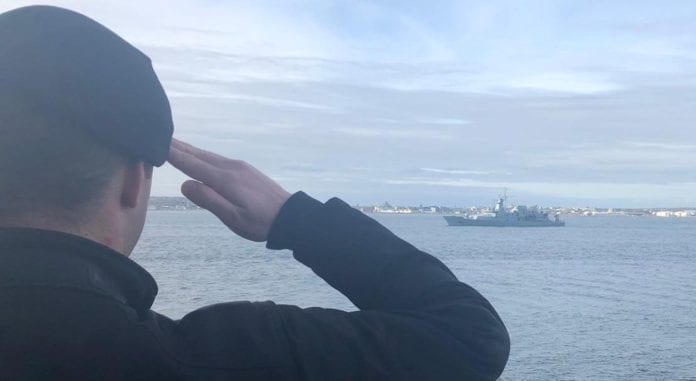 The Irish Navy is keeping up its presence in Galway to help in the fight against the coronavirus pandemic, with the LÉ William Butler Yeats being replaced by the James Joyce.

The William Butler Yeats arrived in Galway on St. Patrick’s Day to help the HSE increase its capacity for coronavirus testing in the region.

A Covid-19 test centre was established at the Port of Galway by the ship’s crew, with tents erected down by the waterfront to facilitate the test centre.

On Wednesday, the William Butler Yeats departed Galway, handing over its duties to the LÉ James Joyce, which is taking over at the test centre with the HSE.

The William Butler Yeats and James Joyce are two of the newest class of patrol vessels build for the Irish Naval Service in the past five years.

The Samuel Beckett the first to roll off the line in 2014, followed by the LÉ James Joyce in 2015, the LÉ William Butler Yeats in 2016, and LÉ George Bernard Shaw last year.

The naval service is helping the health service with the national response to the coronavirus pandemic in three of Ireland’s biggest urban centres.

Outside of Galway, the LÉ Eithne is currently docked in Cork, while the LÉ Niamh is helping with the response in Dublin.

The crew of the William Butler Yeats kept on their toes during this time in the Port of Galway by continuing to carry out routine patrols while the main warship was tied up.

Outside of our current crisis, the main role of the naval service consists of patrolling Irish waters for smugglers and illegal fishing.