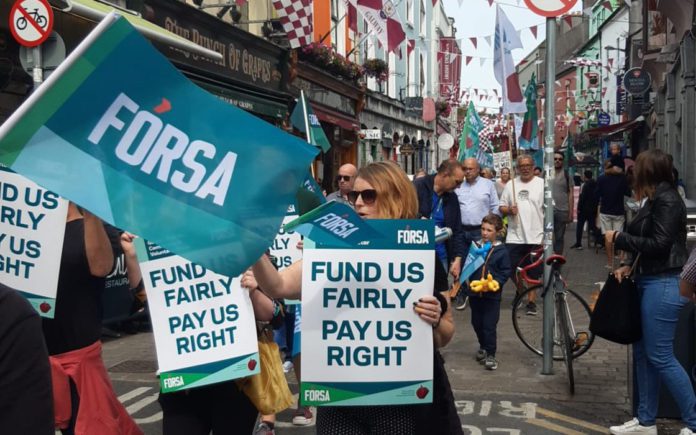 Community sector workers in Galway will be holding a one day strike later this month over pay and conditions.

Fórsa trade union has said that the one day protest will take place at Ability West and Western Care on Thursday, September 22, as part of the ICTU-led Valuing Care, Valuing Community campaign.

Other coordinated strike action by SIPTU and INMO members will take place in Cork, Mayo and Donegal on Wednesday & Thursday, September 21 – 22.

Fórsa national secretary Ashley Connolly said, “Government is failing to grasp the link between its chronic underfunding of the services we’re talking about and the failure to meet the HSE’s recruitment targets in, for example, disability services.

She said that the HSE has acknowledged difficulties in meeting targets for disability services nationwide.

“The HSE leans heavily on the community and voluntary sector to deliver these services.”

“These are the same organisations struggling to attract enough qualified and experienced staff in a very tight labour market.”

“Why? Because they can get better paid work elsewhere.”

“The high level of staff turnover drives up HR and related recruitment costs.”

“The failure to fund the services adequately has led directly to shortfalls in services, growing waiting lists and an intolerable burden placed on nursing and other care staff in the sector.”

Last month saw Fórsa commununity and voluntary sector workers hold a rally in Galway City on Saturday, August 27 as part of the F’und us fairly, pay us right’ campaign.