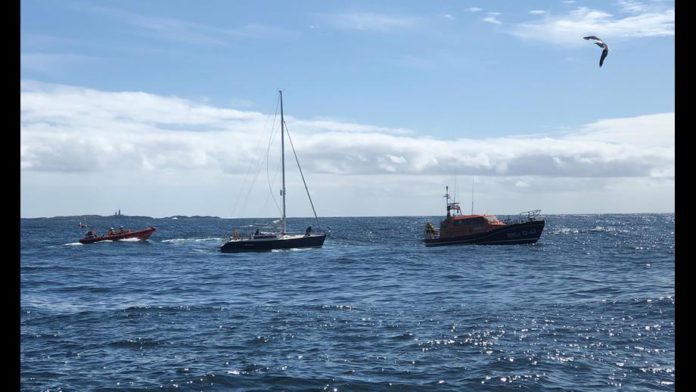 Two Clifden RNLI lifeboats were launched on Sunday afternoon to safely tow a yacht back to shore after it got into difficulty three miles north-west of Slyne Head.

Both lifeboats arrived at the casualty vessel by 2.45pm where they found the yacht, which had two people on board, unable to make headway because ropes were caught in the propeller.

The lifeboat crew removed some rope but were unable to completely free the propeller and shaft.

They then established a towline to bring the casualty vessel and her crew back to Clifden Bay.

The stricken yacht was then towed by Clifden RNLI’s Shannon class all-weather lifeboat and moored safely in Clifden Bay by 4.30pm.

John Mullen, Clifden RNLI Coxswain, said that the yachtsmen did the right thing in calling for assistance and that the volunteers were happy to be able to bring them to safety.

“It’s very important to be prepared when boating or yachting; always wear a lifejacket, have a means of calling for help and check the weather and the tides to help ensure you get to your destination safely. In a coastal emergency, call 999 or 112 and ask for the Coast Guard,” he said.

The Atlantic 85 in-shore lifeboat launched under the command of Joseph Acton with crew members Chris Nee and Alan Kearney. They were followed by the Shannon Class, all-weather lifeboat, St. Christopher. John Mullen was coxswain of the ALB with crew members Alvin Bell; Andy Bell, John Heffernan and Ash Sweeney.