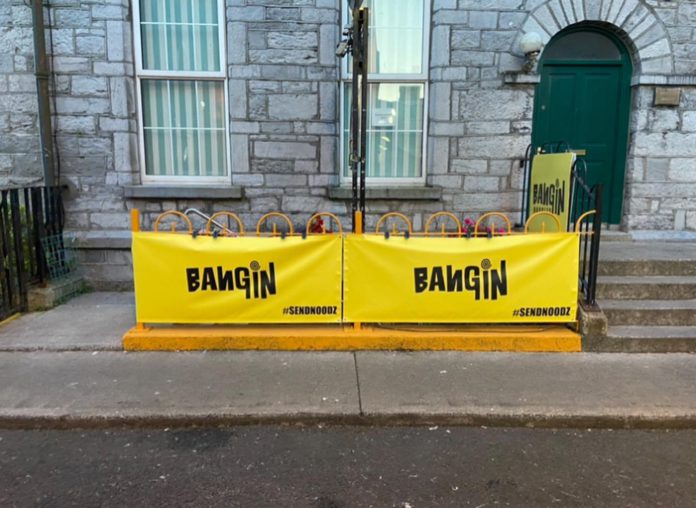 Either a happy ending with honourable thieves, or slickly carried out ransom. However you view it, a city centre restaurant is just happy to have their signs back.

Bangin Noodles on Augustine Street in Galway City shared a plea on Monday for the return of their ‘Sendnoodz’ sign out front, which had been stolen by a bunch of lads the night before.

High level and objectively hilarious negotiations got underway quickly, with the restaurant offering a €100 voucher for the return of their sign, and offering a elaborate system for the exchange to take place, as soon as proof was provided of the safety of their beloved sign.

The plea quickly went viral, to great success, and the very next day the sign was returned with an apologetic note.

In a cunning attempt at misdirection, the thieves signed their return note as Pat McDonagh, though an in-depth investigation found that this probably wasn’t a slip up by the Supermacs godfather.

Roping the clown himself Ronald McDonald into the plot was likely also an effort to muddy the waters by these world class operators. A hollywood adaptation is surely already in the works.

“To all the Baiis at Bangin Noodles,” the note began, setting the tone early with a friendly approach.

“I’m very sorry for taking your sign. Myself and Ronald McDonald got a notion the other night while on a three day session.”

“Ronald told me that if I stole the sign he would let me open up Supermacs ‘Shateside’.” High stakes indeed if it could solve the legal bitterness between the two fast food chains.

“They are also the best craic ever! We are now best friends with the robbers,” the restaurant said in a later Facebook update, celebrating the return of their sign.

“Also 100 euro voucher for Bangin Noodles is given to the bandits and we will also be giving one of you free cocktails later in the week for helping and all the sharing to get our banner returned!”

Those who think all of this has sounded a bit familiar may cast their memory back to the great Carbon caper of 2013, where two thieves managed to slip out of the nightclub with a floor mat.

After they were publicly challenged by the now closed nightclub, the two daring lads managed to sneak it back in without getting caught, earning themselves a €100 bar tab in the bargain.

Clearly Galway is home to a generation of master criminals that will soon storm the world.