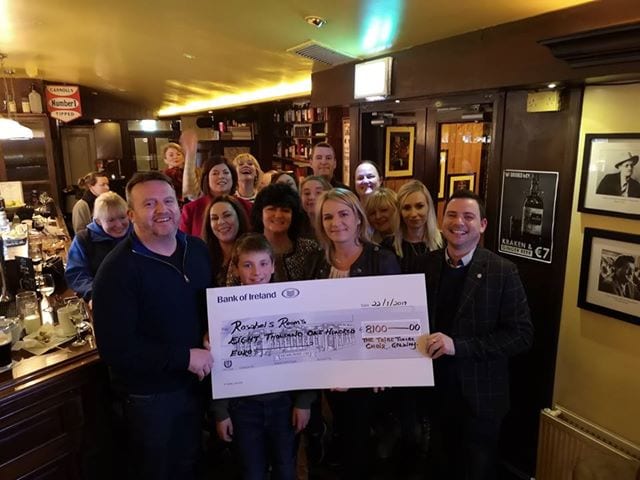 A charity Christmas single released by Galway’s hottest new choir The TribeTones raised over €8,000 for Rosabel’s Rooms, a charity supporting families who have lost a child.

A Winter’s Tale is an original song written by choir director Sean Rowland that has won great praise for the contemporary choir, both locally and nationally.

The song was written as a dedication to Ann Maguire, a friend and mentor to Sean who was tragically killed by a pupil in 2014 while teaching at a school in Leeds.

Last year the 55 strong choir came together with students from Scoil íde Children’s Choir to take the song to the next level by recording a CD and video.

The song was launched at the opening of Galway Christmas Market and proceeds from sales of the CD went towards Rosabel’s Rooms, a charity supporting bereaved families.

Rosabel’s Rooms was set up by Gary Monroe and Suzanne McClean in memory of their beloved daughter, Rosabel, who died suddenly and unexpectedly in April 2017 aged 16 months.

Working with the Irish Hospice Foundation they seek to help other parents who have suffered the loss of a child.

After the success of A Winter’s Tale over the Christmas period, which included a performance on Ireland AM, The TribeTones raised €8,100 to support Rosabel’s Rooms.

The proceeds were recently presented to Gary and Suzanne at an event at McBride’s & Co. bar on Dominick street.

Speaking at the presentation, Sean said that Gary and Suzanne are two “fantastic people who have been through a terrible ordeal.”

“And from that have created something extra special in Rosabel’s Rooms. So the fact that we can be here tonight to support the charity and support Gary and Suzanne in everything they’ve done makes me incredibly proud,” he added.

Posting to on group’s Facebook page, Rosabel’s Rooms thanked the TribeTones and Scoil Íde for all their work on this project, “You must be so proud of ‘A Winter’s Tale’ and you deserve every success imaginable!”.

“Requests for support from Rosabel’s Rooms continue to increase and so our hearts and minds are with other bereaved families around Ireland, who will benefit from this hugely successful initiative.”