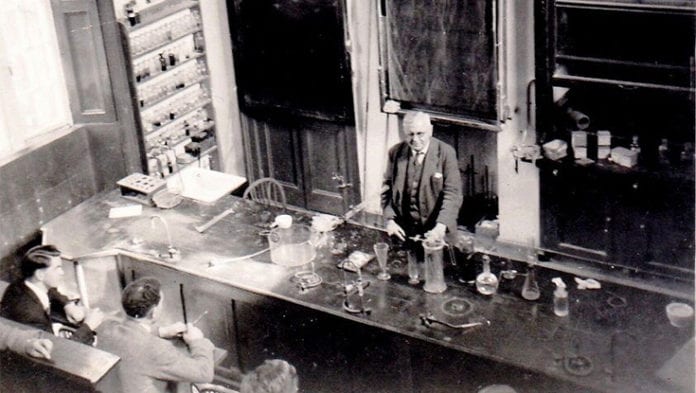 A key figure in science and an Irish Republican during the early 20th century, Dillon’s influential career as a chemist began in 1919 when he was appointed Professor of Chemistry at the then University College Galway.

A century later, and the scientific topics he started exploring, such as the study of carbohydrates and sugars, as well as research into Ireland’s seaweeds, are still relevant in today’s cutting-edge research.

On top of being a celebrated chemist Dillon was one active in the republican movement, serving in the Irish Volunteers and as a Chemical Advisor in the 1916 Rising.

NUI Galway are holding a centenary celebration of when he joined the university on October 2 at the ILAS Centre in Dangan.

The Thomas Dillon Centenary Symposium will see a day long discussion of his research and how it still resonates in chemistry today, as well as a from Dillon’s grandson, Professor Niall Dillon of Imperial College London.

Niall is a renowned molecular biologist who is carrying out research on stem cells and early mammalian development and its relevance to cancer.

The event will begin at 5pm with a ‘Threesis’ challenge where students will have to present their thesis succinctly in three minutes in a way that a lay audience could understand.

A ballet piece performed by Youth Ballet West and an historical lecture by Professor Dillon’s granddaughter, the author Honor O Brolchain at 6 pm will tell the story of “The ‘remarkable’ Thomas P. Dillon: chemist, revolutionary and professor”.

Professor of Chemistry at NUI Galway Paul Murphy says that Dillon’s research in developing products from carbohydrates is more relevant now than it ever has been before.

“Aside from the relevance to health, carbohydrates are highly renewable carbon stores and will certainly have roles to play in generating chemical feedstocks for making drugs or for the production of smart materials in future years.”

“This is potentially very important for the future of the West of Ireland given our proximity to the sea and importance of agriculture to the region.”

Chemistry and the revolution

Thomas P. Dillon was born in Sligo and it was through his love of science that he eventually became involved in Irish republicanism.

In 1912 Dillon was working as an assistant to Professor Hugh Ryan at UCD when he met his future-wife Geraldine Plunkett.

Through his future wife Dillon met her brother Joseph Plunkett, poet and one of the executed leaders of the 1916 Rising.

After serving as a Chemical Advisor for the rebels, Dillon and Geraldine were married on Easter Sunday of 1916, and watched the first smoke of the Rising from their window in the Imperial Hotel, O’Connell Street, where they were honeymooning.

Later Dillon would continue working towards the Republican cause in the political arena, and for his role working for candidates in the 1918 general election that saw Sinn Féin sweep Ireland Dillon was jailed for over a year in Gloucester.

Upon his release from jail, Dillon went straight to Galway for a job interview, keen to continue his scientific career and he was appointed Professor of Chemistry in 1919, a post he held for 35 years.

During all that time he was an enthusiastic teacher and wrote the first chemistry textbook in Irish.

He believed Ireland should be exploiting its natural resources, and his pioneering research in the fields of alginates (polysaccharides from seaweed) gained him an international reputation.

Under his stewardship, the School of Chemistry became a magnet for students, including two of the first women professors of chemistry in Ireland.

When he retired in 1954, he was succeeded by his former student Proinsias S. O’Colla, establishing a tradition of research in carbohydrate and glyco-sciences, which continues at NUI Galway to this day.

Briain Kelly - June 25, 2022 0
Masters of spectacle Macnas are on the hunt for young musicians who can bring the wind and the thunder! Macnas are starting a spectacle music...