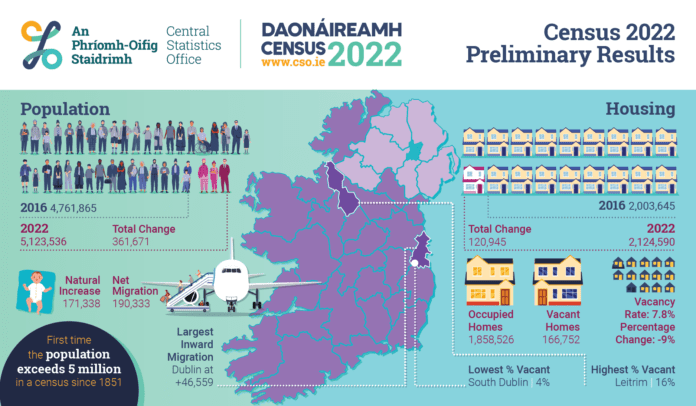 The population of the State has increased by 7.6% to over 5.1 million, the preliminary results of the 2022 Census have revealed.

All counties in the Republic recorded an increase in their populations over the past six years.

The population growth in Co. Galway was smaller than the national average (7.1%) with the county’s population rising to 276,451.

Galway city had 83,456 inhabitants on Census night in early April and Galway county’s population grew to just shy of 193,000.

Nationally, rental properties accounted for over 20% (35,380 dwellings) of the vacant residential units identified in the census.

This figure included short term lettings and properties that were between lets but may not have been advertised.

In Galway County (24%) and Mayo (24%), properties were most often vacant because the owner was deceased, whereas this was much less common in Galway city (6%).

Properties in the cities were in general less likely to be vacant because the residents had emigrated than for rural dwellings.

Commenting on the release, Cormac Halpin, Senior Statistician in the Census Division, said the preliminary results show a population of 5,123,536 on Census night.

“The counties recording the highest population growth were in Leinster. Longford grew by more than 14%, with Meath, Kildare, and Fingal, also growing strongly.

“In contrast to Census 2016, when three counties (Mayo, Sligo, and Donegal) had a fall in their population, the Preliminary Results show that the population of every county has increased since 2016.”