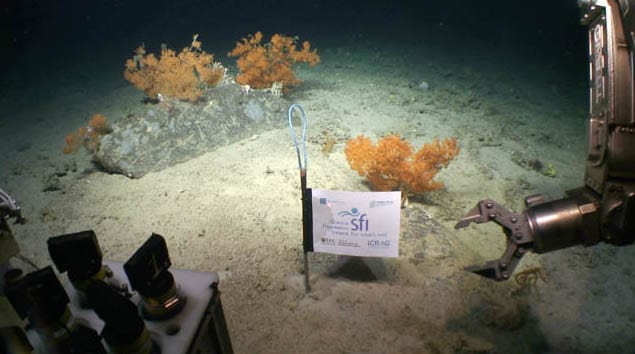 The RV Celtic Explorer has returned to the Marine Institute in Rinville after an expedition mapping an underwater canyon 320km off the coast of Dingle.

The Celtic Explorer research team spent two weeks mapping 1800km² of the seabed to image the upper levels of the canyon.

They explored the seabed using the remote controlled submersible ROV Holland I, finding parts of the canyon with 700m tall cliffs and depths of up to 3000m.

The Porcupine Bank canyon is the westernmost submarine canyon in Irish waters before it exits onto the Abyssal Plain.

Footage taken by the ROV shows that the upper canyon is filled with coral reefs that form a 30m tall rim around the edge of the canyon that runs for 28km.

Down in the depths there’s a layer of coral rubble from the reefs that have broken off the top and slid down.

He says this is a breathtaking discovery to work with, “You could stack ten Eiffel towers on top of each other in there. So far from land this canyon is a natural laboratory from which we feel the pulse of the changing Atlantic.”

The ROV found the rim 600m below the ocean surface, and scras along the face of the canyon where coral had fallen down, churning the bedrock and carving channels into the canyon floor.

Professor Andy Wheeler with the Irish Centre for Research in Applied Geosciences said, “We took cores with the ROV Holland I and the sediments reveal that although the canyon is quiet now, periodically it is a violent place where the seabed gets ripped up and eroded.”

According to Professor Wheeler, submarine canyons play an important role in the ocean’s process of absorbing CO2 from our atmosphere.

“Increasing CO2 concentrations in our atmosphere are causing our extreme weather; oceans absorb this CO2 and canyons are a rapid route for pumping it into the deep ocean where it is safely stored away.”

The research was funded by Science Foundation Ireland, and Geological Survey Ireland with the support of the Marine Institute using its research ship the Celtic Explorer and the ROV Holland I.

Professor Wheeler’s Marine Geology Research Group is undertaking a long term project to monitor the coral habitats within this canyon to understand what drives them, how they change over time, and how sensitive they are to disturbances.