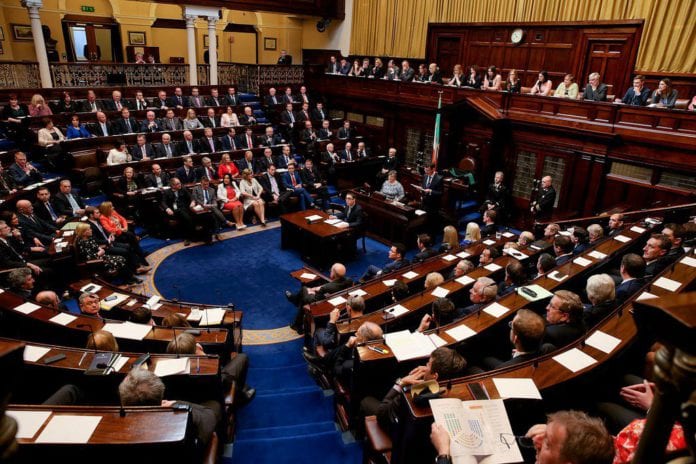 Galway West TD Catherine Connolly delivered an emotional speech in the Dáil this evening, adding her voice to those supporting the repeal of the Eighth Amendment by saying ‘it is time to trust women to make decisions’.

She began her nine-minute speech by painting a picture of the ‘eighties of secrets’, when the Eighth Amendment was brought in, citing cases in which the amendment has affected women’s lives from early in that decade right through to today.

“The Constitution was amended in the eighties, the eighties that gave us the case of Sheila Hodgers who died on the 19th of March prior to the referendum. We knew exactly what we were doing in this country when we passed the referendum. And she died two days after delivering her baby, premature. Her cancer treatment had been stopped by the hospital which claimed it would harm her pregnancy. She also was denied x-rays and pain relief.

“And so, when we passed that amendment, we passed it in an Ireland, as mentioned, of the Kerry Baby tribunal, or the beginning of that.

“We passed it in an Ireland where Anne Lovett died – at the end of this month- 33 years ago I think, on the 31st of January. It was the Ireland which sent Eileen Flynn from her position in a school in Wexford, simply because she loved somebody – a man who she subsequently married, had a further child with and raised his children.

An Ireland of secrets

“We had the eighties of secrets which followed on from decades of secrets and which has continued, which previous speakers have said, right up to today.

Connolly thanked the committee and the ‘courageous women’ who she said brought the injustice to the Dáil’s attention repeatedly in the ‘most appalling of circumstances’.

She also mentioned many other cases through the years, including the Miss D Case in 2007, the X Case, the ’97 Case of a thirteen-year-old girl who went through ‘an appalling process for her to try to get a termination’.

“And then we have the D Case in 2006, fatal-foetal abnormality diagnosed, and a difficult process to get a termination,” she continued.

“In 2010 we have the ABC case and Miss C  suffering from cancer, pregnant with cancer. And we go forward to 2012 in my own city, Savita’s case. And again, an absolutely appalling lack of basic treatment.”

She said that the fact that they were putting more emphasis on a foetal heartbeat than on the treatment of obvious sepsis shouldn’t have happened, and made references to the Whelan Case and also Amanda Mellett.

“Over that period of time, we have been forced by very brave women, women whose health has suffered, women who have died.

Simply has to go

“I’m here tonight to proudly add my voice to say the Amendment has to go,” she said. “It simply has to go. It is time to trust women to make decisions.”

The Independent TD said her comments were being made in the context of the 100 year celebrations of when women got the right to vote – a limited right, she added – and 70 years after Noel Browne bravely but unsuccessfully tried to bring in his Mother and Child Comprehensive Scheme.

“And so, we are excluding women from our health service in the 21st century, 70 years after Noel Browne’s gallant attempt.

“They are excluded from the health service in terms of getting a termination, in terms of going abroad in their thousands – you mention the figure, 3,265 – and they come back bleeding through airports. And we’re standing over that. And we’re excluding them from any follow-up treatment.

“And yes, we should cringe. I think we should collectively cringe that it has taken us this time and this much effort from vulnerable women who have had the courage in the most appalling circumstances, and also our colleagues, Deputy Clare Daly, Deputy Smith and all the other people who have tried – Mick Wallace – all of the Deputies who have brought or attempted to bring bills before this Dáil to deal with the matter in a humane way.

“It is time to treat this society as a secular society. And ironically, for those who are totally against abortion, and I fully respect their opinion, the best way to reduce the rate of abortion is to look at those countries which have a liberal regime and have a very low rate of abortion.

“That’s the most ironic, for me, fact in all of this,” she concluded.