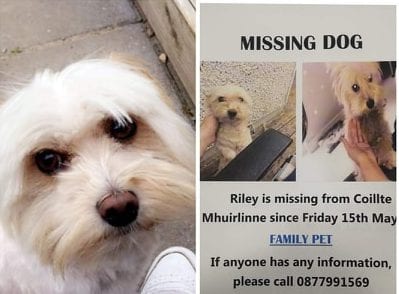 A cash reward has been offered for the safe return of a family pet who has been missing for two weeks.

Riley went missing on the 15th of May from Coillte Mhuirlinne in Ballybane, and hasn’t been seen by the family or any neighbours since that date.

The dog is popular around the estate, and is ‘known by so many people’, the owner has said.

However there are growing concerns about the dog’s safety and whereabouts.

The owner says that her kids ‘miss him like crazy’ and her neighbour told her yesterday that she misses Riley going over to her.

The dog’s mother was a morkie mix of Yorkshire terrier and Maltese, and his father was a papillon.

The family has had Riley for nine years – and anyone with any information about the whereabouts of the dog is urged to come forward.