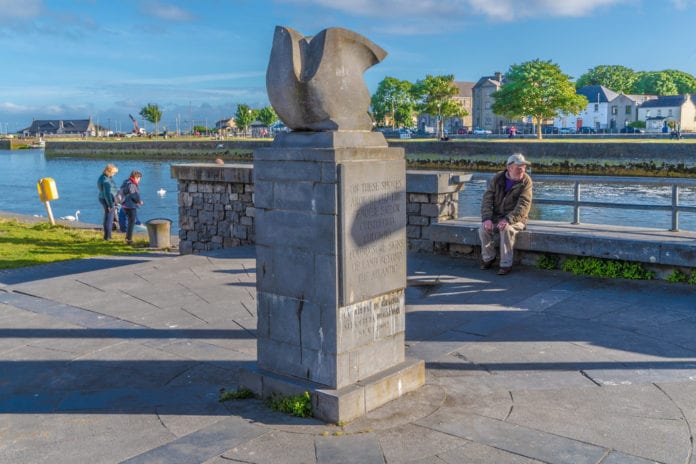 People Before Profit Galway want to see the Christopher Columbus monument near the Spanish Arch taken down, following the removal of statues and street names of slavers across the world during anti-racism demonstrations.

Over the weekend, a statue of English slaver Edward Colston was dragged to the ground in Bristol by protesters, before being taken through the streets and thrown into the water.

In Glasgow, activists from Celtic’s ultras group plastered alternative street names on buildings across the city – replacing those named after slave owners.

Now PBP Galway are calling for the removal of such monuments in Galway – such as the Columbus monument in the city and a plaque to Richard ‘Dick’ Dowling in Tuam.

The monument was unveiled in 1992 to commemorate 500 years since his voyage, and is one of about 600 monuments of the explorer across the world.

The Italian explorer reportedly visited Galway in 1477 before later sailing to America in 1492 – but People Before Profit say that the monument gives no history or context to his voyage or what he did in the Americas.

The party says that during his time in Hispaniola, modern-day Haiti, thousands of native peoples were killed or enslaved.

Estimates of the population of the island before Columbus’ arrival are around 300-500,000 people, but in just two years of Columbus being there, half the population died.

PBP say that having a monument to Columbus in Galway that ‘displays no recognition of his genocidal brutality’ is deeply disrespectful to all those who died through his actions.

The Party’s Galway spokesperson Kiran Emrich said: “Instead of commemorating Columbus, we feel that it would be more appropriate for a memorial that acknowledges Galway’s role in the slave trade that followed Columbus’ voyage to the Americas”.

PBP Galway is also calling for the removal of the plaque to the Confederate army major Richard ‘Dick’ Dowling from the town hall in Tuam.

A proposal was put forward in 2017 to have the plaque in Tuam removed and PBP Galway are now calling on local councillors to revisit this decision.

Kiran Emrich added: “If we are to treat all people equally and recognise that Black Lives Matter then we must remove monuments that honour those who engaged in slavery and genocide of black and native American peoples.”