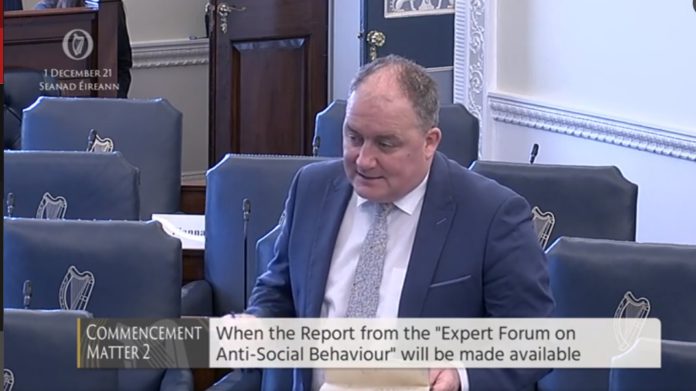 An enhanced, and more highly visible Garda presence is needed in Eyre Square to discourage anti-social behaviour a Galway Senator has said.

Senator Ollie Crowe said in the Seanad that anti-social behaviour has increased in many cities, including Galway, since the pandemic began, asking when the Expert Forum Report on Anti-Social Behaviour will be made available.

“The square has suffered from a spate of antisocial behaviour in recent times, including a tragic incident where a young woman lost sight in one eye when a firework was let off.”

“This has become such an issue that the chief superintendent of Mill Street Garda station in Galway city has even suggested the square may have to be closed at a certain hour.”

Senator Crowe added that this would not be a solution, saying that a “tiny minority” cannot be allowed to affect the fact that Galway is largely a safe place.

He said that Eyre Square is the heart of the city, close to the train and bus stations, and often is where people form their first impression of Galway.

There have been several high profile and well publicised incidents of anti-social behaviour in Eyre Square and other areas of Galway City Centre in recent months.

A 19 year old woman was struck in the face by a firework in Eyre Square last October, receiving serious injuries. One arrest has been made in this case, with a file gone to the DPP.

In another shocking, videos were shared on social media showing a young man being chased by a group of young people on Quay Street, with one person holding two machetes.

Minister of State James Browne responded to Senator Crowe by saying that the “warm welcome” tourists from Ireland and abroad receive in Galway is renowned.

“We have to ensure our public spaces are kept open for the public and communities. That is their purpose and under no circumstances should they be lost to antisocial behaviour.”

He said that Budget 2022 contains €2 billion in funding for An Garda Síochána, which includes provision for 800 new Garda recruits, and 400 additional civilian staff.

“We have the process of civilianisation of An Garda Síochána whereby we use civilian staff to release gardaí from administrative duties back on to the front line to help ensure our communities are being kept safe.”

Senator Crowe asked if this meant that an additional 1,200 Gardaí available over the next 12 months, and if Galway could receive prioritisation as “the capital of the west”.

Minister Browne said that the deployment of Gardaí around the country is an operational matter for the the force itself to decide.

“Once gardaí are deployed to the various divisions, it is a matter for the chief superintendents whether they are deployed as community Gardaí, in high visibility situations or in other settings within An Garda Síochána as needed.”

He added that recruitment is ongoing this year, and the delivery of new civilian staff will see Gardaí released for operational matters.