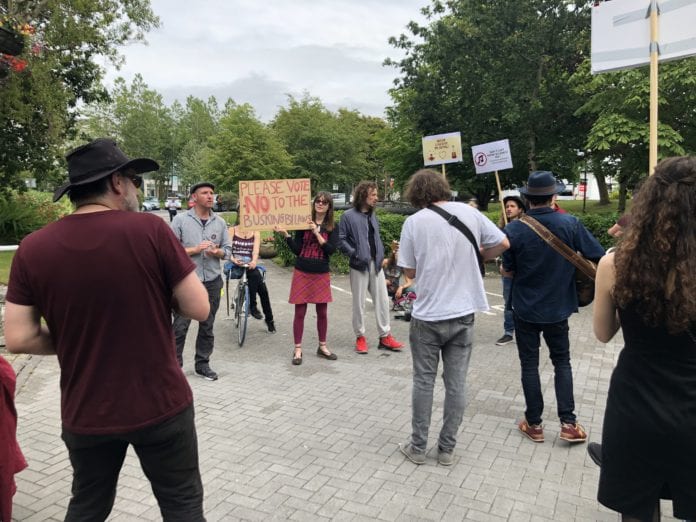 Buskers in Galway can relax and enjoy the Summer following a vote by Galway City Council to defer their decision on the busking by-laws until September.

This was partly due to the large number of public submissions which have been sent regarding the by-laws.

On Monday, activists from the Galway Buskers Community gathered outside Galway City Council to encourage Councillors to vote no on the proposed busking by-laws.

The colorful crowd was equipped with a variety of instruments as they sang “Please vote no all we want to do is busk” repeatedly outside City Hall.

However, some councillors were unhappy with the decision to defer the vote on this divisive issue until September.

Fianna Fáil’s Ollie Crowe voiced his opposition to the deferral declaring it was now time to make a decision.

The Councillor protested that the issue has been “going on for years” while questioning what information the Council would have in September which they don’t have now.

Cllr. Crowe expressed his “disappointment” with having to be informed of the deferral by a retailer that morning. He exclaimed that this was “not good enough”.

Mayor Mike Cubbard spoke in favor of the deferral.

Mayor Cubbard revealed that his intention is to take a “hands on approach” and the deferral would provide an opportunity to meet all interested parties over the summer.

The Council Chamber voted in favor of the deferral with twelve Councillors voting for it while four voted against with two absent.

Last year, the City Council passed by-laws which consisted of measures including a prohibition on buskers from using amplification until after 6pm.

In addition to this controversial provision, the by-laws outline the requirement for buskers under the age of 16 to be accompanied by a parent/guardian.

Although the by-laws were marginally passed by the council they were never brought into effect due to a technical error with the legislation.

The technical error was a result of no commencement date being included in the text.

This error has required the council to start from scratch and go through the process all over again.

This issue remains divisive and controversial and will no doubt go down to the wire when the council finally revisits this matter in September.